Judges: A Literary Commentary On the Book of Judges (Expository #18) (Paperback) 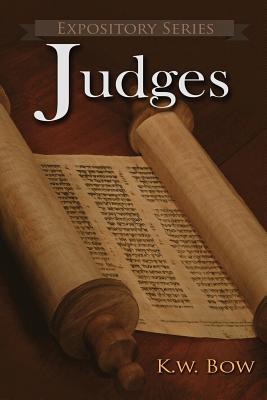 Judges: A Literary Commentary On the Book of Judges (Expository #18) (Paperback)

By Kenneth W. Bow (Commentaries by)

This is book number 18 in the Expository series.

This literary commentary on the book of Judges opens to us one of the darkest times of man's history. The people of God should have been celebrating victories and conquering a new land. Judges
opens the window into the heart of mankind, and the picture is not pretty. Seven times in the book the statement is made "every man did that which was right in his own eyes." The result of that environment was catastrophic. It further emphasises that there was no King in those days, so every man was left to follow his own decisions.

This period of time lasted 450 years. This period of time was as long as the entire duration of the monarchy. Because there is one book of Judges, and six books of the Kings (Samuel, Kings, Chronicles), it is natural to feel like the Kings were a longer period of time. Both of these time periods were 450 years. Why? God gave man 450 years to reveal what happens when man does that which is right in his own eyes. The result of that time period is so abhorrent and tragic, we scarce can comprehend it. The last five chapters of Judges are as bad and ugly as any period of history, any place on the globe.