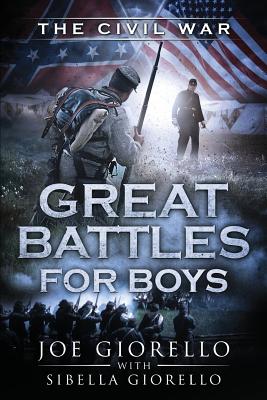 Great Battles for Boys is the bestselling history series that sends young readers "into the fight." Boys learn about the military leaders, weapons, and strategies that won--or lost--history's most important military battles.

Want Boys to Read Books? Give them books they WANT to read

History leaps off the page through historic photographs, maps, and short, powerful chapters. Great Battles for Boys will capture the attention of even reluctant readers.

More Americans died in this war than all other wars combined--more than 600,000 soldiers.

But what REALLY happened?

"In many schools these days, students aren't being taught about the individual battles and struggles of our nation's history, including Gettysburg." 5 Stars, Amazon review Great Battles for Boys: The Civil War.

From the first shots at Fort Sumter to the South's surrender at Appomattox, young readers move chronologically through 20 crucial battles, covering all four years of the Civil War. They'll discover which strategies, tactics, and weapons were used, and which military leaders won victory--or suffered defeat.

Battle of the Ironclads: One of America's deadliest naval battles, right off the coast of Virginia
Vicksburg: Ulysses S. Grant bombs, terrorizes, and starves a southern city into surrender.
Antietam: Robert E. Lee invades the North, and pays a terrible price
Petersburg: The North literally blows a hole in the South--and still loses the battle.

Sherman's March--who, what, when, where, and why

Why was Robert E. Lee considered a military genius, even after he lost the war?

What made Ulysses S. Grant such a powerful general--and a difficult man?

Reviews of the Great Battles for Boys series
"This book should be in school libraries everywhere. It is a treasure trove of information that is engagingly written that makes one feel they are in a great classroom with a great instructor sharing his knowledge in a fun way."
5 Stars, Top 500 Amazon Reviewer

"My nine-year-old son absolutely love this book Full of great facts and enjoyable to read He finished it in two nights and was asking for another " 5 Stars, Richard Dodson, Amazon

After hearing first-hand stories of relatives who served in World War II and Vietnam, Joe Giorello took an interest in military history. He now teaches a highly popular class for boys in the Seattle area called "Great Battles." Joe's goal is to remind young people that history is anything but boring, and freedom isn't free. Contact him at www.greatbattlesforboys.com