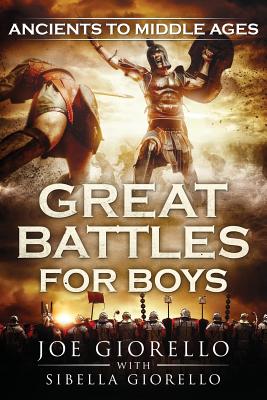 Historic warriors who changed the world. But does your son know why these soldiers were fighting?

Find out in Great Battles for Boys, the bestselling series that takes young readers to the front lines of the world's most significant clashes. History leaps off the page with short, powerful chapters and plenty of historic imagery, capturing the attention of even reluctant readers.

Want boys to read? Give them books they WANT to read

In this installment of the bestselling series, boys travel to the ancient world to learn about twelve famous military battles that drastically altered world history. They'll also learn about the notable men who led those battles, including Alexander the Great, Julius Casaer, and William "Braveheart" Wallace, among many others.

Beginning in Ancient Greece and Persia, the battles continue into the Middle Ages-including the Crusades-and conclude with the year 1588 when the Spanish Armada's attemped invasion of England, and the dawn of modern naval warfare.

Don't miss the highly acclaimed series for boys that reveals the courage and valor of men in battle, and how their bravery changed the world.
Pick up a copy today-and create a reader tomorrow.
Praise for the Great Battles for Boys series"This book should be in school libraries everywhere. It is a treasure trove of information that is engagingly written that makes one feel they are in a great classroom with a great instructor sharing his knowledge in a fun way."-5 Stars, Amazon Top 500 Reviewer
Joe Giorello teaches a highly popular middle-grade class in the Seattle area called "Great Battles for Boys." His goal is to show young men that freedom isn't free, and history is anything but boring. Find out more at his website, http: // www.greatbattlesforboys.com, or at the Facebook page for Great Battles: https: // www.facebook.com/greatbattle