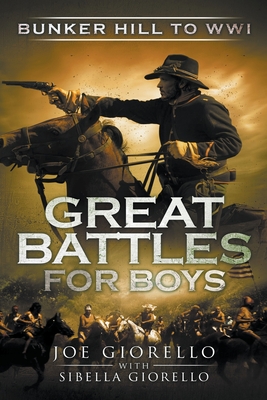 "This book should be in school libraries everywhere..." Amazon Top Ten Hall of Fame reviewer, 5 stars

Does your son play video games for hours but avoids picking up a book?

Does he think history is just a bunch of boring old facts?

What if you could give him all the excitement of screen time but also spark his love of reading and history?

You can with these exciting tales of military battles written especially for boys who are reluctant readers.

In chronological order, beginning with the American Revolutionary War, Great Battles for Boys: Bunker Hill to WWI takes young readers to the front lines of history's most thrilling clashes. Boys discover the raw truth about the colonial fight for freedom, the hardships of Civil War soldiers, the fierce battle of the Alamo, American Expeditionary Forces winning World War I, and much more

Praise for the Great Battles for Boys series:

"This book should be in school libraries everywhere. It is a treasure trove of information that is engagingly written that makes one feel they are in a great classroom with a great instructor sharing his knowledge in a fun way." -- Top Ten Hall of Fame Amazon Reviewer, 5 stars