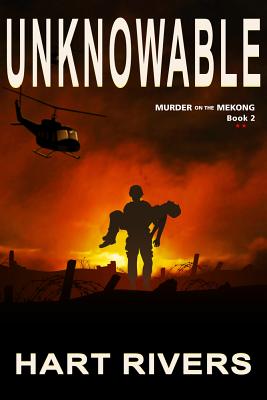 A Romantic Cruise Becomes A Sadistic and Deadly Game For CIA Assassin, J.D. Mikel in UNKNOWABLE, a Spellbinding Tapestry of Dark History, Psychology, and Seduction by Hart Rivers

A master of manipulation and murder, CIA assassin, J.D. Mikel wasn't supposed to fall in love--especially not with Kate Morningside, a woman coveted by a powerful world player intent on filling the CIA’s coffers with Southeast Asia’s copious heroin supply.

When Kate is kidnapped, JD taps her two closest friends to help search for her along the Mekong River in the midst of the Vietnam War. An assassin and two very reluctant shrinks form an unlikely band of brothers who must fight their own demons as well as the machinations of a tyrannical despot known as The Pale Man.

Subjected to mind control, manipulation and betrayal, Kate cannot be certain whether JD intends to rescue her or use her to undermine something unspeakable--he remains UNKNOWABLE.

Publisher's Note: Readers should be prepared for death and graphic violence consistent with the true nature of the poppy trade and the Vietnam war.

Previously titled as MAKING A KILLING, UNKNOWABLE is a tightly woven psychological thriller that reflects the real-world experience and knowledge of the author.

John, creator of the Murder On The Mekong series, has been a practicing psychotherapist for over 40 years, starting in Vietnam where he was a psychology specialist. He received his doctorate from the University of Southern California, is an internationally respected lecturer, has been a consultant to the nation of Norway for their Fathering Project, and maintained a private practice in Los Angeles for twenty years. His time is divided between Hawaii--where he enjoys snorkeling, stand up paddle boarding, and is a featured artist at the Mauna Kea Hotel--and Vancouver Island, B.C., where he is an adjunct associate professor at the University of Victoria in British Columbia.

Olivia is an award-winning author whose novels have sold worldwide, and Series Developer of True Vows, the groundbreaking series of reality-based novels from HCI Books.