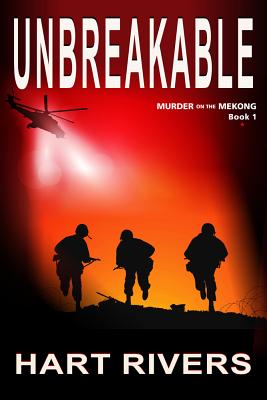 ". . . a chilling and astonishing novel by authors who know their way around a story." ~Peggy Webb, USA Today bestselling author

Freshly Minted Child Psychiatrist Endures the Lost Minds, Lives and Loves of the Vietnam War in UNBREAKABLE, a Tale of Terror, Humanity and Survival by Hart Rivers

Innocence is often the first casualty of war. Such is the case for Dr. Israel (Izzy) Moskowitz, drafted from his residency at Columbia University to the 99KO, the Army’s frontline psychiatric unit of the 8th Field Hospital. Having left his fiancée in New York, Izzy, along with his new friend, Dr. Gregg Kelly, is ill-prepared for the death and carnage of the horrific war that greets him.

J.D. Mikel arrives at the 99KO, presumably as another "shrink" but it's quickly apparent that he's really a "spook"--the CIA's most devious spy/assassin--undercover in search of a so-called Ghost Soldier responsible for the gruesome murders of U.S. troops. He recruits the reluctant Izzy and Gregg as his assistants for their psychological expertise since there could be a military personnel nut job on the loose. Izzy--already questioning his own sanity after witnessing multiple traumatic events--realizes he must quickly find a stronger, craftier, more resilient version of himself.

Along the Mekong River, amidst soldiers losing their minds, mortar attacks, death and the heat of hell's fire, Izzy, Gregg and J.D. discover the true depth of friendship in a shared quest to become UNBREAKABLE.

Publisher's Note: Readers should be prepared for death and graphic violence consistent with the true nature of the Vietnam war.

Previously titled as MAKING A KILLING, UNBREAKABLE is a tightly woven psychological thriller that reflects the real-world experience and knowledge of the author team.

John, creator of the Murder On The Mekong series, has been a practicing psychotherapist for over 40 years, starting in Vietnam where he was a psychology specialist. He received his doctorate from the University of Southern California, is an internationally respected lecturer, has been a consultant to the nation of Norway for their Fathering Project, and maintained a private practice in Los Angeles for twenty years. His time is divided between Hawaii--where he enjoys snorkeling, stand up paddle boarding, and is a featured artist at the Mauna Kea Hotel--and Vancouver Island, B.C., where he is an adjunct associate professor at the University of Victoria in British Columbia.

Olivia is an award-winning author whose novels have sold worldwide, and Series Developer of True Vows, the groundbreaking series of reality-based novels from HCI Books.