The Things Our Fathers Saw - The War In The Air Book One: The Untold Stories of the World War II Generation from Hometown, USA (Hardcover) 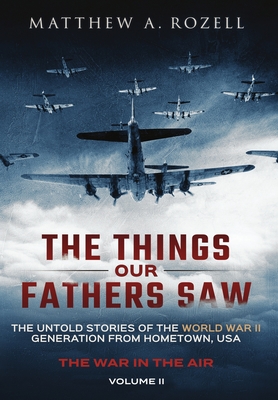 The Things Our Fathers Saw - The War In The Air Book One: The Untold Stories of the World War II Generation from Hometown, USA (Hardcover)

"For all of us to be free, a few of us must be brave, and that is the history of America." But dying for freedom isn't the worst that could happen. Being forgotten is.

-- "You flew with what I would call 'controlled fear'. You were scared stiff, but it was controlled. My ball turret gunner--he couldn't take it anymore... I guess he was right. He's dead now. But he had lost control of the fear. He never got out of that ball turret; he died in that ball turret." --B-24 bombardier

How soon we forget. Or perhaps, we were never told. That is understandable, given what they saw.

-- "I spent a lot of time in hospitals. I had a lot of trouble reconciling how my mother died of a cerebral hemorrhage] from the telegram she opened, saying I was shot down and] "missing in action". I didn't explain to her the fact that 'missing in action' is not necessarily 'killed in action'. You know? I didn't even think about that. How do you think you feel when you find out you killed your mother?" --B-24 bombardier

At the height of World War II, LOOK Magazine profiled a small upstate New York community for a series of articles portraying it as the wholesome, patriotic model of life on the home front. Seventy years later, a history teacher tracks down the veterans with a connection to "Hometown, USA" who fought the war in the air over Europe, men who were tempered in the tough times of the Great Depression and forged in battle. He rescues and resurrects firsthand accounts of combat and brotherhood, of captivity and redemption, and the aftermath of a war that left no American community unscathed.

Here are the stories that the magazine could not tell, from a vanishing generation speaking to America today.

-- "I was in the hospital with a flak wound. The next mission, the entire crew was killed. The thing that haunts me is that I can't put a face to the guy who was a replacement. He was an 18-year old Jewish kid named Henry Vogelstein from Brooklyn. It was his first and last mission. He made his only mission with a crew of strangers." --B-24 navigator

By the end of 2018, fewer than 400,000 WW II veterans will still be with us, out of the over 16 million who put on a uniform. But why is it that today, nobody seems to know these stories?

As we forge ahead as a nation, we owe it to ourselves to become reacquainted with a generation that is fast leaving us, who asked for nothing but gave everything, to attune ourselves as Americans to a broader appreciation of what we stand for.

-- "A must-read in every high school in America. It is a very poignant look back at our greatest generation; maybe it will inspire the next one." Reviewer, Vol. I