The Things Our Fathers Saw-The Untold Stories of the World War II Generation-Volume IV: Up the Bloody Boot-The War in Italy (Hardcover) 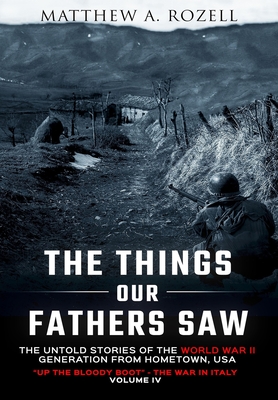 The Things Our Fathers Saw-The Untold Stories of the World War II Generation-Volume IV: Up the Bloody Boot-The War in Italy (Hardcover)

"For all of us to be free, a few of us must be brave, and that is the history of America". Read how a generation of young Americans saved the world. Because dying for freedom isn't the worst that could happen. Being forgotten is.

VOLUME 4 IN THE BEST SELLING 'The Things Our Fathers Saw' SERIES
This book brings you more of the previously untold firsthand accounts of combat and brotherhood, of captivity and redemption, and the aftermath of a war that left no American community unscathed.

(Up the Bloody Boot--The War in Italy)

From the deserts of North Africa to the mountains of Italy, the men and women veterans of the Italian campaign open up about a war that was so brutal, news of it was downplayed at home. By the end of 2018, fewer than 400,000 of our WW II veterans will still be with us, out of the over 16 million who put on a uniform. But why is it that today, nobody seems to know these stories?

Maybe our veterans did not volunteer to tell us; maybe we were too busy with our own lives to ask.As we forge ahead as a nation, we owe it to ourselves to become reacquainted with a generation that is fast leaving us, who asked for nothing but gave everything, to attune ourselves as Americans to a broader appreciation of what we stand for.
This book should be a must-read in every high school in America. It is a very poignant look back at our greatest generation; maybe it will inspire the next one. Reviewer, Vol. I