Across the Rhine: The Things Our Fathers Saw-The Untold Stories of the World War II Generation-Volume VII (Paperback) 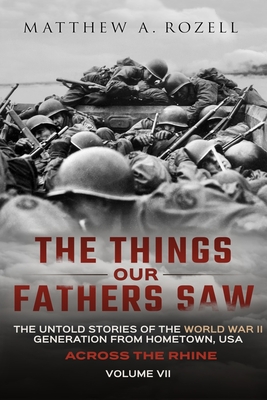 Across the Rhine: The Things Our Fathers Saw-The Untold Stories of the World War II Generation-Volume VII (Paperback)

From the Great Depression to Pearl Harbor, from high school to the combat zone, from boot camp to the end of the Third Reich and Imperial Japan, here are more of the stories that we can't afford not to hear, from a vanishing generation speaking to America today.

In 'Across The Rhine', you will begin to liberate a continent with our veterans as they scale the cliffs at Pointe Du Hoc overlooking Omaha Beach. You will jump with the 504th Parachute Infantry Regiment to capture bridgeheads in the Netherlands, and re-group to slug it out in the freezing Ardennes Forest in the winter of 1944-45. The mission will then push you over the Siegfried Line and all the way to Germany's most formidable western natural defense, the swift and swollen quarter-mile wide Rhine River. As spring 1945 arrives, you will be with our GIs as they arrive at the gates of Dachau and have their very souls shaken as they become eyewitnesses to the greatest crime in the history of the world-the Holocaust; the Nuremberg War Crimes trials will then bring you face to face with the architects of terror, the most notorious war criminals of the twentieth century.

In 'Across The Rhine', our veterans sit down and speak to you directly about what they experienced. World War II brought out the worst in humanity, but it also brought out the best; in these narratives you will draw your own lessons. Here are the stories that a special generation of Americans told us for the future when we took the time to be still, to listen, and to draw strength.

"This book should be a must-read in every high school in America. It is a very poignant look back at our greatest generation; maybe it will inspire the next one."