The Ghost of Johnny Tapia (Paperback) 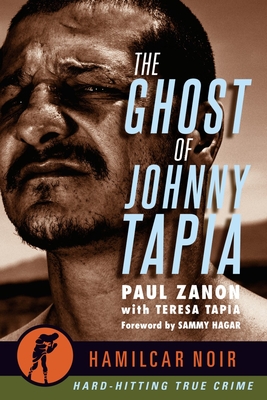 "A gritty, engrossing, and concise account of a boxer's meteoric career and tortured personal life."--Kirkus Reviews

If I wake up, I know I'm a success. The day I don't wake up, I know I'll be home. I have one foot on this earth and one foot has crossed over. I didn't just die, I lived."--Johnny Tapia ...the ghost of Johnny Tapia lives on "Mi Vida Loca" (My Crazy Life) was Johnny Tapia's nickname and his reason for being. Haunted by the brutal murder of his beloved mother when he was a child, fighting and drugs gave him the escape he craved--and he did both with gusto. In The Ghost Of Johnny Tapia, Paul Zanon, with the help of Tapia's widow Teresa, tells the harrowing and unforgettable story of a boxing genius who couldn't, in the end, defeat his demons. From the Foreword: Johnny had incredible heart, was such a sweet man, but was also tormented. He had two sides to him. The sweetest, nicest guy, but then the other side which could probably kill you. He was tortured with his addictions, but Johnny was always pure emotion in that ring.--Sammy 'The Red Rocker' Hagar, Musician The Ghost of Johnny Tapia is the second in the Hamilcar Noir series. Hamilcar Noir is Hard-Hitting True Crime that blends boxing and true crime, featuring riveting stories captured in high-quality prose, with cover art inspired by classic pulp novels. Perfect Gift For Boxing and True Crime Fans The Ghost of Johnny Tapia, combined with other books in the Hamilcar Noir series, makes a great gift for fans of stories about the darker side of boxing. Books in the Hamilcar Noir series also make for a great gift idea for true crime fans--whether they are a die-hard boxing fan or not, they will devour these quick reads and ask for more