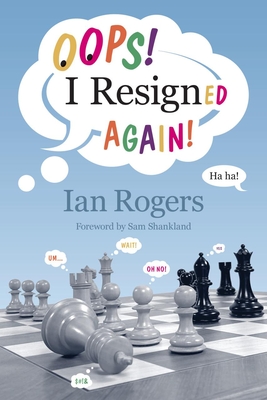 Who would be silly enough to resign a tournament game they were not losing? As Oops I Resigned Again shows, almost anyone - including some of the world's best players

Learn the stories behind the most embarrassing moment any chessplayer can suffer, while trying to outmatch the poor, unfortunate player who resigned. Indeed, this is the only chess puzzle book where you cannot do worse than the player in the game Pit your wits against legends such as Kramnik, Nunn, Tarrasch and Timman, knowing that they failed the test and that you can, perhaps, do better.

Australian Grandmaster Ian Rogers has assembled 100 extraordinary positions in themed sets of 5 puzzles designed to both baffle and delight the solver, in a format which makes it easy to sneak a look at the answer

With a foreword written by US Olympian Sam Shankland - baring his soul about his own silly resignation at a top level tournament - Oops I Resigned Again is a rare treat for chessplayers of all strengths, who after finishing the book will fervently hope never to have to say... Oops

Australian grandmaster Ian Rogers is a journalist, author and commentator. He was Australia's top-ranked player from 1984 until his retirement in 2007. He played 14 Olympiads for Australia and won more than 130 classical tournaments on four continents, including twice winning the Commonwealth Championship title. He resigned unnecessarily only once This is his first book for Russell Enterprises.