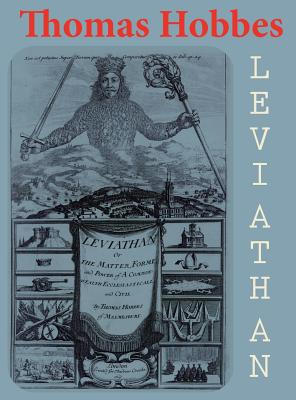 Written during the English Civil War (1642-1651), Leviathan argues for a social contract and rule by an absolute sovereign. Hobbes wrote that civil war and the brute situation of a state of nature ("the war of all against all") could only be avoided by strong, undivided government.

After lengthy discussion with Thomas Hobbes, the Parisian Abraham Bosse created the etching for the book's famous frontispiece in the g ometrique style which Bosse himself had refined. It is similar in organisation to the frontispiece of Hobbes' De Cive (1642), created by Jean Matheus. The frontispiece has two main elements, of which the upper part is by far the more striking.
In it, a giant crowned figure is seen emerging from the landscape, clutching a sword and a crosier, beneath a quote from the Book of Job--"Non est potestas Super Terram quae Comparetur ei. Iob. 41 . 24" ("There is no power on earth to be compared to him. Job 41 . 24")--linking the figure to the monster of that book. (Due to disagreements over the precise location of the chapters and verses when they were divided in the Late Middle Ages, the verse Hobbes quotes is usually given as Job 41:33 in modern Christian translations into English, Job 41:25 in the Masoretic text, Septuagint, and the Luther Bible; it is Iob 41:24 in the Vulgate.) The torso and arms of the figure are composed of over three hundred persons, in the style of Giuseppe Arcimboldo; all are facing inwards with just the giant's head having visible features. (A manuscript of Leviathan created for Charles II in 1651 has notable differences - a different main head but significantly the body is also composed of many faces, all looking outwards from the body and with a range of expressions.)
The lower portion is a triptych, framed in a wooden border. The centre form contains the title on an ornate curtain. The two sides reflect the sword and crosier of the main figure - earthly power on the left and the powers of the church on the right. Each side element reflects the equivalent power - castle to church, crown to mitre, cannon to excommunication, weapons to logic, and the battlefield to the religious courts. The giant holds the symbols of both sides, reflecting the union of secular, and spiritual in the sovereign, but the construction of the torso also makes the figure the state.