The Glovemaker: A Novel (Paperback) 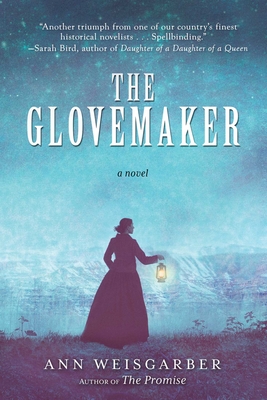 The Glovemaker won the 2020 WILLA Literary Award in Historical Fiction and was a finalist for the Western Writers of America’s 2020 Spur Award for Best Western Historical Fiction, the 2019 David J. Langum Prize in American Historical Fiction, and the 2019 Association for Mormon Letters Award for Novel. In the inhospitable lands of the Utah Territory, during the winter of 1888, thirty-seven-year-old Deborah Tyler waits for her husband, Samuel, to return home from his travels as a wheelwright. It is now the depths of winter, Samuel is weeks overdue, and Deborah is worried.

Deborah lives in Junction, a small town of seven Mormon families scattered along the floor of a canyon, and she earns her living by tending orchards and making work gloves. Isolated by the red-rock cliffs that surround the town, she and her neighbors live apart from the outside world, even regarded with suspicion by the Mormon faithful who question the depth of their belief.

When a desperate stranger who is pursued by a federal marshal shows up on her doorstep seeking refuge, it sets in motion a chain of events that will turn her life upside down. The man, a devout Mormon, is on the run from the US government, which has ruled the practice of polygamy to be a felony. Although Deborah is not devout and doesn’t subscribe to polygamy, she is distrustful of non-Mormons with their long tradition of persecuting believers of her wider faith.

But all is not what it seems, and Deborah and her husband’s step-brother, Nels Anderson, are faced with life-and-death decisions that question their faith, humanity, and both of their futures.

“Weisgarber’s marvelous third novel (after The Promise) is set in the rugged canyon country of southern Utah during the winter of 1887–1888 as a Mormon woman struggles to hold her faith in the face of religious persecution and her fear of the law. . . . This is a rich, powerful, and wholly immersive tale grounded in Utah and Mormon history.”
—Publishers Weekly, starred review

"[The Glovemaker] is compelling historical fiction, with a judicious weaving of late-19th-century history, fascinating explanations of Mormon practices and memorable characters who hold the reader’s interest from beginning to end. Highly readable and accessible, the voice of each character rings true, and we care what happens to them. . . . Part love story, part religious explication, part mystery, this novel judiciously weaves all of these fictional trajectories into a seamless whole. . . . Not only does this book bring to life an important part of American history, but a deeper understanding of religion and geography, and the challenges and struggles of living in the West in the 1880s. It’s a journey you won’t forget."—Houston Chronicle

"In Utah in the late 1880s, a stranger threatens to shatter an isolated community. A compelling mosaic created from historic details and the nuances of daily frontier life."—William Kent Krueger, Parade Magazine

"Against the backdrop of a bitter Utah January, novelist Ann Weisgarber's The Glovemaker kicks off a taut exploration of right and wrong, of good and evil, with a simple knock at the door. . . . The Glovemaker is a . . . rewarding [novel]. It’s just right for a winter night and worthy of some rumination."—Dallas Morning News

"Weisgarber makes effective use of early Mormon history to explore moral choice, and compression in language, setting, number of characters, and chronology lends this tale an unusual force." —Booklist

"In The Glovemaker, historical novelist Ann Weisgarber beautifully paints the harsh, lonely environment of the Utah Territory during the winter of 1887–1888 while creating tense moments and life-altering revelations for her heroine, Deborah. . . . Through the snow and wind, Deborah balances precariously between the tenets of her faith and her newfound courage. Weisgarber’s strong grip on suspense keeps the pages turning until the last storm passes and Deborah finds peace within herself."—BookPage
"Offers a window into the Mormon culture and conflicts over polygamy. A truly fresh perspective to a little-known era of history.”—Western Writers of America

“[Weisgarber’s] exploration of a woman struggling to satisfy her conscience is telling and touching.”—Sunday Times (London)

“Part literary thriller, part survival story, part history of a time in America that many people won’t know about . . . Huge emotional power and an ending the will satisfy.”—NZ Booklovers (New Zealand)

“Weisgarber has within her toolkit a knack for getting under the skin of her characters. . . . It’s within the novel’s characterisations and meticulous adherence to the book’s form which makes the work more significant among other works of historical fiction. It’s a truly literary piece.”—Big Smoke (Australia)
“A compelling story balanced on the knife edge between religion and ethics, crime and sin, compassion and fear.”—Mary Doria Russell, author of Doc and Epitaph

"The Glovemaker is another triumph from one of our country’s finest historical novelists. Once again Ann Weisgarber gives us a spellbinding, multi-layered heroine whose survival is jeopardized by the harshness of the land and the man she loves. A tale of moral complexity as compelling and suspenseful as the great American classic, The Ox-Box Incident, The Glovemaker deftly explores a woman, alone with her conscience and the devastating consequences of serving community over self, finding the strength to choose right over righteousness.” —Sarah Bird, author of Daughter of a Daughter of a Queen and Above the East China Sea

"“When I first started reading Ann Weisgarber’s new book, I had no expectation that a novel about renegade Mormons in Utah in the 1880s could turn out to be so precisely suspenseful that, if Alfred Hitchcock were alive, he might snap up the film rights. The Glovemaker is a humane, high-velocity glimpse into the ever-simmering dilemmas of faith and conscience.” —Stephen Harrigan, author of The Gates of the Alamo and Remember Ben Clayton

"The Glovemaker, placed in Utah in 1888, is a beautiful novel that while deeply anchored in history feels oddly relevant in today's world. Told primarily from the point of Deborah, a Latter-day Saint in Mormon country who cannot stand to watch federal government lawmen hunt Mormon men and their families. The issue then was religious liberty and Deborah finds herself in the thick of it." —Jan Jarboe Russell, author of The Train to Crystal City

"Ann Weisgarber is a historian of the first degree, but her true strength lies in crafting sweeping and often poignant fictional narratives of the iconic women who helped settle the American heartland. Ms. Weisgarber, in The Glovemaker, has once again created a heroine of extraordinary grace and courage in a challenging, at times violent, but ultimately sublime landscape." —Kathleen Kent, author of The Heretic’s Daughter

"The Glovemaker, Ann Weisgarber’s engrossing, troubling, honest-to-goodness third novel, is as stark and touching as the lives described, as tense and testing as the Utah backlands where it’s set, as fine as any fiction you will read this year." —Jim Crace, author of Harvest and The Melody

"In this tension-filled and beautifully written novel about loyalty and love, courage and conscience, Ann Weisgarber introduces us to a frontier woman forced to make a split-second decision that could shatter her family and her entire fragile community—or redeem them all."—Tripfiction.com

"While this is excellent character-centered literary fiction, its plot feels as taut as a thriller . . . The Glovemaker stands out for its well-wrought setting and its portrait of faith, independence, and courage at a pivotal historical moment."—Reading the Past

"A very good read—affecting, honest, authentic. . . . You will want to read it to the end. . . . Well-researched and very well depicted, [The Glovemaker] is a gift for Mormons and non-Mormons alike, for all readers of historical fiction interested in the background of the beautiful, unique state of Utah. Read it and be enlarged."—Association for Mormon Letters, Julie J. Nichols

"The Glovemaker is an intriguing historical novel about an “in-between place” filled with in-between Saints. . . . A tense, suspenseful story filled with empathetic characters and interesting historical details. . . . [Wiesgarber] addresses the issue of plural marriage with sensitivity and empathy (especially toward the women and children in polygamist families). This, coupled with skilled prose, interesting characters, and an engrossing plot, kept me reading and enjoying The Glovemaker."—Association for Mormon Letters, Susan Jensen

"Weisgarber has within her toolkit a knack for getting under the skin of her characters; we have a deep understanding of the visceral fears and terror her main character Deborah experiences . . . It’s a truly literary piece; reaffirming in its chronicling of the human spirit in the face of unholy obstacles, but at the same time unending in its grim determination to provide a realistic depiction of the harshness of the lives of those earlier Latter Day Saints." —The Big Smoke

"[A] powerful novel where you feel the cold and fear and desperate situation of all the characters. . . . This is part literary thriller, part survival story, part history of a time in America that many people won’t know about, and also a novel about grief and new beginnings. . . . A slow, atmospheric read, it has huge emotional power and an ending that will satisfy. Ann Weisgarber was longlisted for the Orange Prize—I hope she wins it with this fine, nuanced novel."—NZ Booklovers

"The Glovemaker . . . asks important questions about love and loyalty, faith and independence, the power of love and of family. And through Deborah and her struggles, Ann Weisgarber brings vividly to life the joys and terrors of life in a small, isolated community on the US frontier, the moral compromises we all face, and the capacity of one strong woman to adapt in a time of rapid change."—New Books Network

What Readers Have to Say:

“This was a book that pulled me in from the beginning. I didn’t want to leave. . . . I will anxiously await Ms. Weisgarber’s next book.”—brokenteepee.com

“A quietly powerful novel. . . . It takes a very skilled writer to make this into an engrossing read that is both sensitive and strong, but Weisgarber has it in spades.”—samstillreading.com

"The Glovemaker is historical fiction from the top shelf.”—noveldeelights.com ​

“Good historical fiction illuminates the past through story. And with Ann Weisgarber’s precise, pitch-perfect writing in The Glovemaker, you’re in for quite a tale.”—Below the Salt News

“A poignant character study, this book was a surprisingly satisfying read.”—rosannelortz.com

“This a powerful novel of belief, morality and the human spirit.”—lisareadsbooks.com

“I was glued to the page. . . . The Glovemaker is a heartfelt, heart-wrenching, and heart-warmingly intimate page turner. Weisgarber takes us right into the hearts of these characters and compels us to ask ourselves: in their shoes, what would we have done?”—literarytreats.com

“Unnerving, atmospheric, and insightful! Weisberger has done a remarkable job of taking the barest of historical facts and surrounding them with fiction that is richly described, mysterious, believable, and exceptionally fascinating.”—whatsbetterthanbooks.com

“A well-told, absorbing tale. . . . The author has the amazing skill of creating, convincing characters whose skin you can slip inside for the duration of the book.”—beadyjansbooks.com

“A well-written and engaging historical novel. Ann Weisgarber provides a sensitive and nuanced portrayal of a little known time in Mormon history.”—bookreviewsandmorebykathy.com ​

“A truly literary piece; reaffirming in its chronicling of the human spirit in the face of unholy obstacles.”—lessercolumn.com.au