After Hours in Aztlán (Paperback) 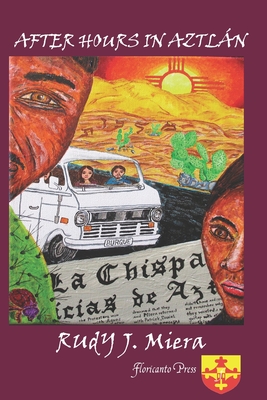 Published by Floricanto Press.
www.FloricantoPress.com
#Latinobooks "At that moment Kiko de la O remembered that Luz, during their long ride up here, told him something quite prophetic. When they were writing about Jes's Paz, who they had never met, she said that she imagined that he was someone who did what he did more out of love for his people than hate for their enemies..." (excerpt from After Hours in Aztl n)
"Hang on to your hats, folks, because Rudy J. Miera's gang of student revolutionaries is on the loose, bumbling in their awkward but affecting way towards Salvation "-John Nichols, Author, The Milagro Beanfield War, The Sterile Cuckoo, etc.
"Rudy J. Miera, with his poignant, humorous and culturally-steeped prose, invigorates and inspires readers along a journey of college students on the brink of adulthood as they ignite to live for something beyond their own personal dramas, taking their as-of-yet-unridden idealism against the bridle of politics, greed and racism to find justice and bring voice to the voiceless." -Stacia Spragg-Braude, Author, To Walk in Beauty: A Navajo Family's Journey Home and If There's Squash Bugs in Heaven, I Ain't Staying.
"Rudy's over-the-top humor is conveyed with wit, authenticity, and appreciation for New Mexico lingo as shown by his young and somewhat innocent, but very sincere, compadres." -Harvey Buchalter, Teacher, Judaica Sculptor and Translator, Mein Leben, the life of artist Israel Rouchomovsky.
"Another extraordinary view of Southwest 'Burque barrio Chicanada'" in After hours in Aztl n by Rudy J. Miera" -Frank Zu iga, Screenwriter, Disney Pictures Director.
"Rudy J. Miera's tale of youthful activism in 1970s New Mexico shines strong and true because it comes out of his own life and is burnished by his creative gifts."-Ollie Reed Jr., Writer for The Albuquerque Journal Rudy J. Miera is a native New Mexican who was born and grew up in Albuquerque's North Valley. He and his wife, MariAnne, enjoy the splendor of nature in Corrales and continue to walk the acequias (ditches) of the village, garden, appreciate fine literature, film and music, and time with nieces, nephews and godchildren. Rudy plays the role of Mr. Dom nguez in the movie, Lady of Guadalupe, to be released in 2020 by Pinnacle Entertainment and Fidem Entertainment.