Religion of the Fathers: Context for the Book of Abraham (Paperback) 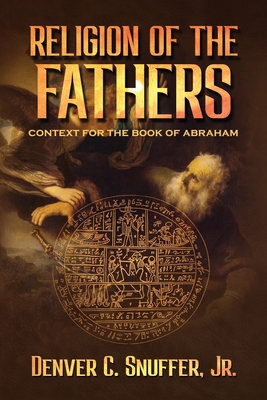 The first and most complete religion belonged to Adam and Eve. They lived with God, and after being cast out, they retained a memory of living in God's presence. Adam taught the first eight patriarchs born after him the Religion of the Fathers, which involved direct communion, contact, and connection between mankind and God. It enabled the faithful to hear directly from the Lord His promise of eternal life, to seal them by covenant into His Heavenly Family.

Despite nearly universal apostasy and rebellion against God while Adam lived, the line of first or Patriarchal Fathers preserved the true religion. Their religion was Adam's religion, and their understanding reached back to the Garden of Eden. They experienced visions, ascended into Heaven, obtained promises of exaltation, and were transformed by their experiences from men into angels of God.

After Shem (Melchizedek), an apostasy lasted until Abraham. Although he was raised by an idolater, Abraham searched for the true God of Heaven. He "sought for the blessings of the Fathers," the very thing Malachi prophesies will return before the great and dreadful return of the Lord. Like Adam (at the beginning) and his descendant, Enoch, Abraham was caught up into Heaven and received a tutorial endowment from God. The covenant of the first Fathers was renewed and conferred upon him by Melchizedek, thereby restoring continuity back to Adam.

Abraham represents the key Patriarchal Father prophesied of in Malachi. Abraham not only renewed the covenant of the Fathers (including Noah and Enoch), but also, through the Abrahamic covenant, God established Abraham as the new head of the family of God on Earth.

The Book of Abraham has become a battleground because it is so important for our salvation. Recovering the Religion of the Fathers, becoming of one heart with the Fathers, and fulfilling the prophecy of Malachi are directly connected to Abraham. The more we can learn of Abraham, the more we can know of the covenant with the Fathers spoken of by Malachi, and those same blessings of the Fathers that will be administered again before the end. We can, if faithful, obtain all that the original Fathers received from God at the beginning.

Therefore, any book written by Abraham should be priceless to us.

The Lord's "strange act" is approaching completion. The promises made to the Fathers are being vindicated. The Restoration has recommenced, and if we are faithful, it will not be paused or interrupted again. Although Israel's numbers are few, there have never been great numbers willing to sacrifice everything for God.

The Religion of the Fathers presents a strong defense of the authenticity of the Book of Abraham as translated through Joseph Smith Jr. in 1835, and subsequently published in the Times & Seasons in 1842. It also presents an expanded view of the Restoration of the gospel, its ancient roots, current covenants, and prophesied future.

Topics covered include Christianity, miracles, heaven, hell, the apocalypse, truth, the Bible, the devil, historical evidence, Lectures on Faith, the Ten Commandments, signs of the times, Teachings of the Prophet Joseph Smith, the law of consecration, the Joseph Smith Papers, Joseph's journal, the translation process, the destiny of the Christian church, polygamy, saving grace, and many more.