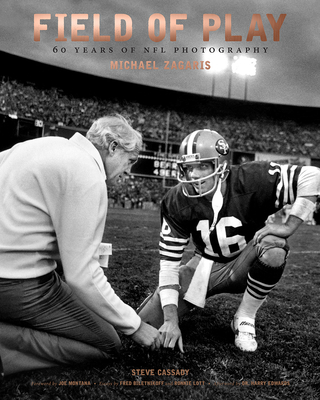 For the past 60 years, Michael Zagaris has taken his camera behind the scenes of the NFL, capturing the moments that define America’s game. With unparalleled access—42 Super Bowls, 49 seasons as team photographer for the San Francisco 49ers, and a behind-the-scenes passport to the rest of the NFL—Zagaris takes his aim beyond the field and to the locker room, the bench, the practices, and the training camps. His intimate portraits convey the nerves, the tension, the pain, and the elation with emotional depth and the clarity of a longtime insider. With contributions from celebrated Hall of Famers Joe Montana, Ronnie Lott, and Fred Biletnikoff, as well as text from renowned sportswriter Steve Cassady and sociologist Dr. Harry Edwards, Field of Play highlights Zagaris’s storied career as a photographer, showcasing the irresistible force of football and celebrates its enduring presence.

Michael Zagaris is a critically acclaimed sports and music photographer who has photographed the NFL since the 1970s and continues to be the San Francisco 49ers team photographer to this day. He has photographed 42 Super Bowls and 12 World Series and has earned three Super Bowl rings and one World Series ring. Zagaris lives in San Francisco with his wife and muse, Kristin. Steve Cassady is a retired professor of English, intercollegiate softball coach, and athletic director at Merced College. He has written narrative nonfiction since the 1970s, when he covered the NFL for Pro! magazine. Cassady has written more than 100 articles and a dozen books, including two children’s books. He lives in Merced, California. Joe Montana was a quarterback in the NFL for 16 seasons. Drafted in 1979 by the San Francisco 49ers, Montana led the team to victories in Super Bowls XVI, XIX, XXIII, and XXIV. He was inducted into the Hall of Fame in 2000. Ronnie Lott was a cornerback, free safety, and strong safety in the NFL for 14 seasons. Drafted by the San Francisco 49ers in 1981, Lott helped lead the team to their first-ever Super Bowl victory as a rookie in Super Bowl XVI. He was inducted into the Hall of Fame in 2000. Fred Biletnikoff was a wide receiver for the Raiders for 14 seasons. At the time of his retirement, Biletnikoff was ranked fourth on the NFL all-time receiving list. He was inducted into the Hall of Fame in 1988. Dr. Harry Edwards is a professor of sociology, civil rights activist, and author of The Revolt of the Black Athlete, among numerous other books and articles. He also serves as a consultant to the San Francisco 49ers and the Golden State Warriors. He lives in the Bay Area of California.