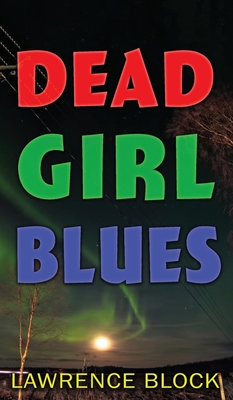 You might as well know this going in: Lawrence Block's new novel is not for everyone. It's recounted in journal form by its protagonist, and begins when he walks into a roadhouse outside of Bakersfield, California, and walks out with a woman.

And rapes and murders her.

But, um, not in that order.

Right. But it's what he does with the rest of his life that's really interesting...

Lawrence Block has been writing and publishing crime fiction for sixty years. He's received recognition for lifetime achievement in the US and the UK. His books have won awards and occasionally show up on bestseller lists. Several of them have been fimed.

"I don't think it's terribly commercial. And there are elements that will put off a lot of readers.

"But, see, Dead Girl Blues doesn't owe me a thing. I hadn't planned to write it, so it doesn't have to bring in money to justify the time I spent on it. The book is its own justification. I'll publish it myself, on my 82nd birthday, and all of y'all can buy it or not buy it, read it or not read it, and like it or not like it.

"I've shown it to some friends whose opinions I trust, and they told me that Dead Girl Blues is one of the very best things I've ever written. And then they added that they could see where it might have problems.

"So I read it again last week, and I realized DGB was exactly the book I wanted it to be. And how often does that happen? And what more could an old man possibly ask for?"