A Storm in the Stars: A Novel of Mary Shelley (Hardcover) 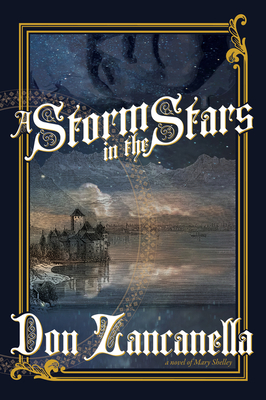 A Storm in the Stars: A Novel of Mary Shelley (Hardcover)

In London, early in the nineteenth century, five-year-old Mary Godwin, daughter of philosopher William Godwin, plays with her sister Fanny, mourns her deceased mother, and marvels as a hot air balloon lands not far from the Thames. Nearby, in Sussex, eleven-year-old Percy Shelley entertains his three sisters by telling them stories and performing tricks with chemicals and fire.

A few years later Mary and Percy meet and fall in love in the Godwin bookshop near Black Friar’s Bridge. At first their romance seems doomed—Percy is a well-known atheist and already has a wife, and Mary is only seventeen and a under the care of her father and his overbearing second wife. But they consider such impediments trivial and are soon on their way to Ireland, to Switzerland, and across Europe (with Mary’s flighty half-sister Claire in tow).

Upon reaching Lake Geneva they find lodgings near where the notorious poet Lord Byron and his peculiar personal physician John Polidori are staying—the same Lord Byron Claire seduced back in London, her reasoning being that if Mary can have a poet, why can’t she? And so begins the summer when Mary Shelley will begin writing her novel about a man who brings to life a creature of his own making, Percy and Lord Byron will debate politics and poetry in the midst of lightning storms, Polidori will begin writing his novel about a man with a taste for human blood, and snow will fall in the middle of July.

Don Zancanella’s most recent novel Concord was released in April 2021 (Serving House Books). Zancanella is well known as a short fiction writer, including his John Simmons/Iowa Short Fiction award winning collection, Western Electric (University of Iowa Press, 1996) and the 1998 O. Henry Prize winner "The Chimpanzees of Wyoming Territory" published in the Alaska Quarterly Review. More recently, “Mr. Dog” was cited as a distinguished story of the year in the 2019 Best American Short Stories, and “Feed Them” has been nominated for a Pushcart Prize (2020). Don Zancanella was born in Laramie, Wyoming. He taught at the University of New Mexico and lived in Albuquerque. He currently lives and writes in Boise, Idaho with his wife and rescue dogs.

“In A Storm in the Stars, Don Zancanella brings to vivid life a fascinating cast of characters. Today Percy Bysshe Shelley, Mary Shelley, Lord Byron, and their artistic and eccentric friends may seem larger than life names captured in stodgy English Literature textbooks. Zancanella renders them extraordinary and yet vitally real, down to earth, and so very, heartbreakingly, young.” — Denise Giardina, author of Emily's Ghost

“An elegant sojourn in the early 19th century inspired by the travels and travails of the Romantic poets Shelley and Lord Byron. The world of this novel especially brings Mary Shelley's own brilliance to satisfying life.” — Alix Christie, author of Gutenberg's Apprentice

“With A Storm in the Stars, Don Zancanella brings the high stakes lives of the Shelley couple to turbulent life. This is a moving account of the making of a writer—of two writers—and the high-achieving early nineteenth century community of which they were a part.” — Fiona Sampson, author of In Search of Mary Shelley

“A panoramic sweep through the lives and viewpoints of the Shelley circle, this compassionate novel is beautifully told.” — Alix Hawley, author of All True Not a Lie In It

“What a beguiling group of characters—Mary and Percy Bysshe Shelley, Wollstonecraft, Godwin, Lord Byron, Keats. Misfits and creative spirits, they fought convention and sought to live authentic, genuine lives of meaning. This is an ambitious novel that succeeds magnificently in taking us into the minds and hearts of these fascinating, complicated, and brave individualists of the past, all of whom can inspire us in the present.” — Elizabeth J. Church, author of The Atomic Weight of Love

Praise for Western Electric: “Cumulatively, the eight stories in this exceptionally cohesive first collection feel novelistic in scope and scale. Most of the tales are set in the wide open spaces of Wyoming, ranging in time from 1868 to the late 1970s. A strong sense of how landscape and geography shape and mould character permeates the book. In the clever and subtle ‘Disarmament,’ two loners, one an Air Force captain in charge of maintaining decoy missile silos, the other a schoolteacher from Cheyenne who rents a two-room cabin on the prairie each summer, discover each other through their affinity for the plains . . . In fact, as the title suggests, the incursion of technology into the West—the world's inexorable reeling in of its open spaces—is the theme that unites this polished collection.” — Publishers Weekly

“Selected by Oscar Hijuelos, this 1996 winner of the John Simmons Short Fiction Award brings together eight stories set in the West, predominantly in Wyoming. As unadorned as the western plains, these tales feature some distinctive characters described in functional, no-frills prose. Originally published in literary magazines, Zancanella's tales move back and forth in time, summoning both the wild days of the 19th century and the present age of corporate ranching. An earnest debut—Zancanella could develop into a regional writer of interest.” — Kirkus Reviews