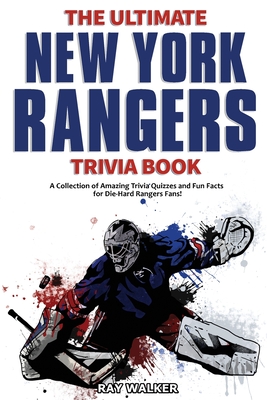 Want to be the Big Cheese in The Big Apple where New York Rangers trivia is concerned?

The franchise has become a New York landmark since making its NHL debut in 1926-27, and even though a 50-year Stanley Cup drought followed instant success, New Yorkers have never abandoned their beloved team.

The glory days and struggles are all covered from front to back as we reminisce about the club's most famous characters, such as Lester Patrick, Frank Boucher, Harry Howell, Rod Gilbert, Phil Esposito, Brian Leetch, Mark Messier, Emile "The Cat" Francis, and, of course, the great Wayne Gretzky.

We have included 15 different quizzes consisting of 300 stimulating questions accompanied by 150 inspiring "Did You Know?" facts.

Test your Rangers loyalty with puzzlers such as:

Everything you need to know about Madison Square Garden's most famous tenants is included here.

Don't miss the bus when it comes to Rangers trivia. Become a mastermind instead and prepare to take on all challengers by reading the latest New York Rangers trivia quiz book