Everything Harder Than Everyone Else: Why Some of Us Push Ourselves to Extremes (Hardcover) 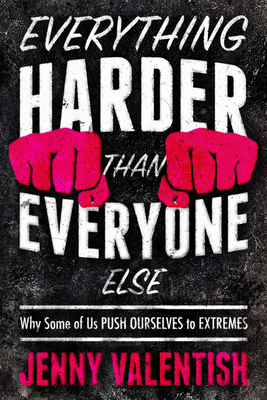 A no-holds-barred, gonzo dive into the world of extreme behavior; from abstinence to ego, punishment to curiosity, obsession to reinvention, acclaimed journalist Jenny Valentish uncovers what drives those who push the limits of endurance.

What do extreme eaters, MMA fighters, ultramarathon runners, and professional sex roleplayers have in common? What drives some people to push their bodies and minds to the brink, putting everything on the line to test the bounds of their capacity? When Jenny Valentish worked through her own addictions, she became fascinated by extremes in their myriad and unexpected manifestations. In the darkly funny, brash, and irresistible Everything Harder Than Everyone Else, Valentish immerses herself in the lives of sex workers, body builders, and dedicated fighters and finds that many of the people she encounters have overcome addictions and trauma to find release and community where the stakes are at their highest.

Harnessing a journalistic approach that's equal parts brazenly curious and remarkably compassionate, Valentish finds herself neck-deep in her own investigation, embroiling herself in the world of competitive Muay Thai fighting and in the dark chambers of a sex dungeon. At every turn she stares unflinchingly into the darker corners of culture that polite society ignores and repudiates, asking readers and herself, how far are you willing to go?