Grace on the Mountain Trail (Hardcover) 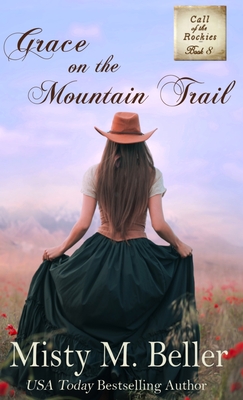 This epic journey is her last hope to find her lost brother-the only family she has left.

When Lola Carson's father died, his last words spoke of a half-brother she'd never known about. And now, to claim her own inheritance and come to terms with her father's secret life, she must find this mysterious man-whose last known whereabouts are somewhere west of the wild Rocky Mountains. After hiring family friends to accompany her on the trek, she sets out for a wilderness few white women have ever seen. She doesn't expect the majestic peaks to captivate her so, nor the half-dead brave they find on one of the slopes.

White Owl left his village and his broken heart behind when he set out for a fresh start. His newfound faith is the one anchor in his life. He's desperate to learn more about the God he's committed to follow and become an interpreter for the missionaries who led him to faith. But he barely starts his journey when a hunting accident nearly kills him. The woman who discovers him in the midst of his fevered delirium seems to be a gift from above.

But the more White Owl learns about Lola's companions and her dangerous quest, the more he realizes his own calling is clear-to take her safely to her brother. The question is, will he have to sacrifice more than his heart to accomplish that goal?

From a USA Today bestselling author comes another epic journey through breathless landscapes and adventure so intense, lives will never be the same.﻿