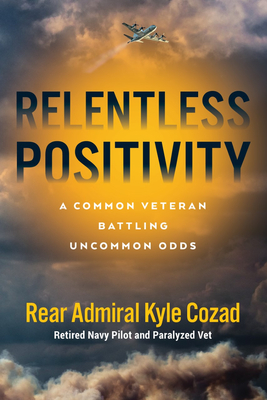 
Usually Ships in 1-5 Days
Why me? This is what most people would wonder when suddenly faced with a life-altering hardship. Rear Admiral Kyle Cozad was no different--at first. However, only days after a freak accident that left him largely paralyzed from the waist down, he chose to view his circumstances with unfailing optimism. That positive attitude, combined with his sheer grit and resilience, helped him do what his neurosurgeon said would be impossible: walk again.
In Relentless Positivity: A Common Veteran Battling Uncommon Odds, Cozad chronicles his career in naval aviation, reflecting on his roles as the Navy's senior leader in the White House Situation Room during the Osama Bin Laden raid and as the commander of the Joint Task Force in Guantanamo Bay. He even relates his experience as commander of the Naval Education and Training Command when the training center suffered a terrorist attack. Then, Cozad recounts how his whole life was turned upside-down when an accident seriously damaged his spinal cord. With raw vulnerability, he describes his incredible journey of recovery and rehabilitation, focusing on the key factors that helped him along the way: his family, the U.S. Navy, and the sense of purpose he developed after his injury.
Whether you have experienced a life-altering injury of your own or are simply looking for the inspiration needed to overcome a seemingly insurmountable challenge, regardless of your profession or place in your life, this book is a must-read. As Rear Admiral Kyle Cozad says, "Life throws each one of us curveballs that we never, ever expect. It's how we adjust ourselves to overcome those curveballs that really defines who we are as individuals."
Rear Admiral Kyle Cozad graduated from the U.S. Naval Academy in 1985. His Navy career centered around aviation training and operations, and he served extensively as an instructor pilot in numerous operational and training tours around the world. During his career, Cozad commanded at various levels within naval aviation and joint multi-service in five critical assignments. Ashore, he served in a variety of diverse leadership positions within the Navy and Department of Defense, including as the Navy's senior leader in the White House Situation Room, commander of Joint Task Force Guantanamo Bay, and commander of the Naval Education and Training Command. Following a service-connected spinal cord injury in 2018, Cozad recovered and returned to full service, completing his final thirty months of active duty as the Navy's only wheelchair-bound flag officer. During that time, he became an advocate for disability awareness and competed in the 2019 Department of Defense Warrior Games. Prior to his retirement, Cozad was recognized as one of the Department of Defense's top employees with disabilities in 2020. After a thirty-five-year career in the Navy, Cozad joined the Naval Aviation Museum Foundation as the President and Chief Executive Officer in October 2020. Today, he resides in Pensacola, Florida--affectionately known as the "Cradle of Naval Aviation." Since his injury, Cozad has dedicated countless hours mentoring other spinal cord injury victims through their individual recoveries.