A Mysterious Country: The Grace and Fragility of American Democracy (Hardcover) 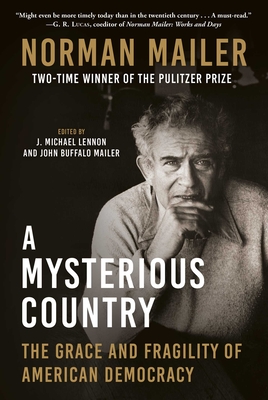 A Mysterious Country: The Grace and Fragility of American Democracy (Hardcover)


Usually Ships in 1-5 Days
Published on the centenary of Norman Mailer’s birth, a timely and urgent call to preserve our democracy
From his bestselling first novel, The Naked and the Dead, to his last work, American democracy was a lifelong project for Norman Mailer. It was his grand theme. Nearly all of his books touched on the pros and cons, the strengths and weaknesses, the grace (to use his word) and fragility of the American experiment as well as the threats to it—from autocratic leaders and a complacent citizenry, from violent protest and radical conservative assaults on it, from “soft fascism” and the ills of racism and poverty. In the sharp and impassioned language of a political Cassandra and with the eye of a novelist and journalist, he explored the underlying psychological, social, and economic causes of the country’s fragile polity and offered urgent prescriptions for its reinvigoration.

A Mysterious Country is a carefully selected collection of Mailer’s most incisive—and sometimes remarkably prophetic—commentary on American democracy and what must be done to safeguard it. The anthology draws on both published and unpublished sources, from Mailer’s great works of narrative nonfiction and novels as well as essays, interviews, letters, speeches, and talk show appearances. It includes pungent remarks on every president from FDR through George W. Bush, as well as correspondence with several. Throughout, what shines through is Mailer’s passion for our democratic project—as well as the freedom that comes with it—and a keen awareness of its potential for failure, its virtues, and what is required of us to keep it intact.

Norman Mailer was a giant of American letters and one of our most consequential public intellectuals of the postwar period. A two-time winner of the Pulitzer Prize and winner of the National Book Award, he was an originator of new journalism and cofounder of the Village Voice. He was the author of twelve novels, among them The Naked and the Dead and Harlot’s Ghost, and numerous works of nonfiction, many probing American politics and society, including The Armies of the Night, Miami and the Siege of Chicago, and TheExecutioner’s Song, as well as several plays and screenplays. He was also a lifelong activist who ran for mayor of New York City in 1969. He died in 2007.

J. Michael Lennon, emeritus professor of English at Wilkes University and chair of the editorial board of the Mailer Review, is the author or editor of several books about Norman Mailer, including his monumental authorized biography, Norman Mailer: A Double Life; Selected Letters of Norman Mailer; and On God: An Uncommon Conversation, coauthored with Mailer. His work has appeared in The New Yorker, the Paris Review, New York Review of Books, New York, Washington Post, Chicago Tribune, Times Literary Supplement, Provincetown Arts, Hippocampus, and Mailer Review. He teaches in the Maslow Family Graduate Creative Writing Program at Wilkes University, which he cofounded in 2005. He lives in Bryn Mawr, Pennsylvania.

John Buffalo Mailer is an award-winning screenwriter, journalist, playwright, actor, and producer. He is currently creative director for the development and production company Mailer Tuchman Media and is executive-producing a feature Showtime documentary about the life of his father, directed by Emmy Award-winner Jeff Zimbalist. He is also creating a dramatic scripted series of his father’s life directed by James Gray and based on J. Michael Lennon’s Norman Mailer: A Double Life. He has appeared on Fox News, Air America, Democracy Now, WNYC, TheBigThink.com, CSPAN’s Book TV, WPIX New York, and HuffPost Live,among others. As a journalist, he has freelanced for Playboy, New York Magazine, ESPN Books, The Norman Mailer Review, The American Conservative, Vector, and Inked Magazine, among others. He lives with his wife, actress Claudia Maree Mailer, in Brooklyn, New York.
“This impressive volume comes at a crucial time for the United States where democracy is threatened by a looming fascism fueled by runaway capitalism and ubiquitous digital technologies. A Mysterious Country shows the breadth and nuance of Mailer’s political thought that might even be more timely today than in the twentieth century. Smartly curated and significant, it is not only for students of Mailer but for those who seek a critical and granular understanding of the soul of the United States. A Mysterious Country is a must-read.”—G. R. Lucas, PhD, Professor of English, Middle Georgia State University, coeditor, Norman Mailer: Works and Days
“Norman Mailer’s nearly lifelong preoccupation with the fear that American democracy could be displaced by fascism is on full display in this outstanding book. Anyone who wants to understand the present crisis of America should read this superb collection of his insights.”—Robert S. McElvaine, author of The Times They Were a-Changin’: 1964, the Year the Sixties Arrived and the Battle Lines of Today Were Drawn

"In this anthology, Norman Mailer reminds us of what a great writer he was—and many other things. He was a contrarian historian of our times, endlessly curious, as well as a psychic eye of a cyclops monster, ready to say the most outrageous things to provoke our thinking, a formidable debater and opponent who made even neutral folk want to fight him. Mailer was a conscience for this country, a fearless gunslinger of our national psyche. At the very least, although he may infuriate you and make you angry, at other times, he will enlighten you. His is a new way of seeing. What more can a writer give us?”—Oliver Stone

"A Mysterious Country is an illuminating synthesis of Mailer's most salient observations about America, a cohesive collection of trenchant insights into the promise of democracy and the forces that threaten to dismantle it. Startling in its contemporary resonance, this book offers a valuable contribution to ongoing conversations about the direction of our American experiment."—Magdalen McKinley, president of the Norman Mailer Society.
“Democracy is a grace. Democracy is something essentially splendid because it’s not at all routine or automatic. Democracy, in fact, depends on the notion that there are more people who are good than bad, and that’s a very large notion. Fascism goes back to our infancy and our childhood, where we were always told how to live. We were told, ‘Yes, you may do this; no, you may not do that.’ So, the secret of fascism is that it has this appeal to people whose later lives are not satisfactory.”—Norman Mailer, from remarks at a New York Public Library event, June 27, 2007