Stone's Rules: How to Win at Politics, Business, and Style (MP3 CD) 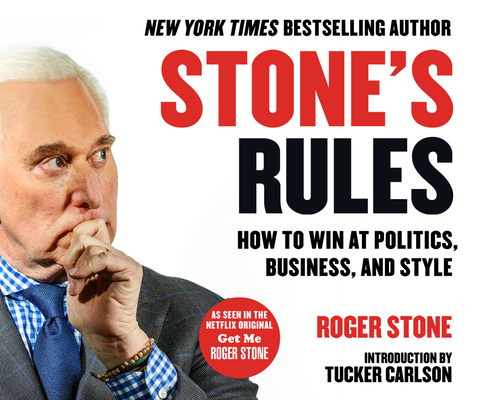 Stone's Rules: How to Win at Politics, Business, and Style (MP3 CD)


Usually Ships in 1-5 Days
At long last, America's most notorious political operative has released his operating manual A freedom fighter to his admirers, a dirty trickster to his detractors, the flamboyant, outrageous, articulate, and extraordinarily well-dressed Roger Stone lays out Stone's Rules-the maxims that have governed his legendary career as a campaign operative for four American presidents, from Richard Nixon to Donald Trump. As a raconteur, pundit, prognosticator, and battle-scarred veteran of America's political wars, Roger Stone shares his lessons on punking liberals and playing the media, gives an inside look at his push to legalize marijuana, details how much linen to show at the cuff of an impeccably-cut suit, lays out how and why LBJ orchestrated the murder of JFK, and reveals how to make the truly great marinara sauce that is the foundation of Stone's legendary Sunday Gravy. Part Machiavelli's The Prince, part Sun Tzu's The Art of War, Stone's Rules is an operating manual for navigating the rough-and-tumble of.