The Emerald Tablet of Hermes: The Smaragdine Table, or Tabula Smaragdina (Paperback) 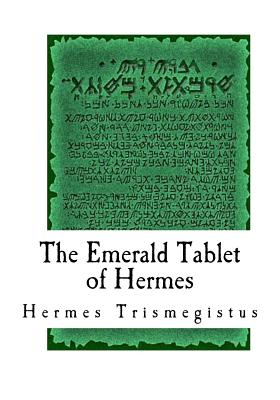 The Emerald Tablet of Hermes

Also known as The Smaragdine Table, or Tabula Smaragdina

The Emerald Tablet, also known as the Smaragdine Table, or Tabula Smaragdina, is a compact and cryptic piece of the Hermetica reputed to contain the secret of the prima materia and its transmutation. It was highly regarded by European alchemists as the foundation of their art and its Hermetic tradition. The original source of the Emerald Tablet is unknown. Although Hermes Trismegistus is the author named in the text, its first known appearance is in a book written in Arabic between the sixth and eighth centuries. The text was first translated into Latin in the twelfth century. Numerous translations, interpretations and commentaries followed.

The Tablet probably first appeared in the West in editions of the psuedo-Aristotlean Secretum Secretorum which was actually a translation of the Kitab Sirr al-Asar, a book of advice to kings which was translated into latin by Johannes Hispalensis c. 1140 and by Philip of Tripoli c.1243. Other translations of the Tablet may have been made during the same period by Plato of Tivoli and Hugh of Santalla, perhaps from different sources.

The date of the Kitab Sirr al-Asar is uncertain, though c.800 has been suggested and it is not clear when the tablet became part of this work.

Holmyard was the first to find another early arabic version (Ruska found a 12th centruy recension claiming to have been dictated by Sergius of Nablus) in the Kitab Ustuqus al-Uss al-Thani (Second Book of the Elements of Foundation) attributed to Jabir. Shortly after Ruska found another version appended to the Kitab Sirr al-Khaliqa wa San at al-Tabi a (Book of the Secret of Creation and the Art of Nature), which is also known as the Kitab Balaniyus al-Hakim fi'l- Ilal (book of Balinas the wise on the Causes). It has been proposed that this book was written may have been written as early as 650, and was definitely finished by the Caliphate of al-Ma'mun (813-33).