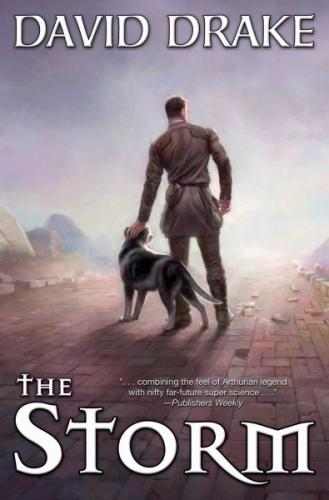 This is book number 2 in the Time of Heroes series.

THE THRILLING RE-TELLING OF ARTHURIAN LEGEND FROM MASTER OF SCIENCE FICTION AND FANTASY DAVID DRAKE CONTINUES! A young Champion must rescue a friend and battle an enemy at the heart of a chaotic world.

A CHAMPION AT THE DARK HEART OF CHAOS

The universe has shattered into chaos and monsters. Jon the Leader is dedicating his life to reuniting the scattered hamlets into a Commonwealth where all humans can live protected against the darkness and the things that lurk within. But no man can reshape the universe alone. Jon needs Champions to face the powers of chaos, which will not listen to any argument but force.

Lord Pal of Beune is one of those Champions. He has fought monsters and evil on behalf of Mankind, and he will fight them again. But now Guntram, the man who transformed Pal from an ignorant rube into a bulwark of the Commonwealth, has disappeared. Pal must locate his friend and mentor—and then he must battle an entity that may be at the core of the splintered universe!

Praise for The Storm:
“I finished The Storm last night. I loved it. It was such a sweet read. Pal is one of [Drake’s] best people, humane and strong and generous, and his voice carries the whole book.”—Cecelia Holland

“Counterbalancing the setting’s strangeness, Pal himself is thoroughly levelheaded and decent, the kind of hero readers will enjoy rooting for. This is an enjoyable exploration of a pleasantly peculiar world.”—Publishers Weekly

". . . a wonderful cast of characters in a fabulous world of courtiers, peasants, Beasts, and mysterious Envoys. Drake has imbued Arthurian legend with a convincing sf spin."—Booklist

About prequel The Spark:

“The fun is in the telling, and Mr. Drake has a strong voice. I want more!”—Philadelphia Weekly Press

“[S]pace opera is alive and well. This series is getting better as the author goes along . . . character development combined with first-rate action and memorable world designs.”—SFReader.com

David Drake was attending Duke University Law School when he was drafted. He served the next two years in the Army, spending 1970 as an enlisted interrogator with the 11th Armored Cavalry in Vietnam and Cambodia. Upon return, he completed his law degree at Duke and was for eight years assistant town attorney for Chapel Hill, North Carolina. He has been a full-time freelance writer since 1981. His books include the genre-defining and best-selling Hammer’s Slammers series and the nationally best-selling RCN series, including In the Stormy Red Sky, The Road of Danger, The Sea without a Shore, and Death's Bright Day.