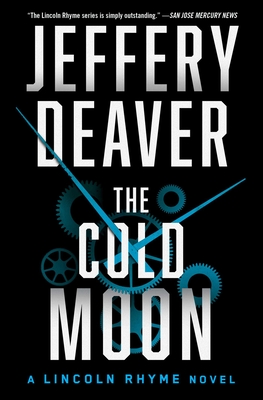 This is book number 7 in the Lincoln Rhyme Novel series.

Lincoln Rhyme, the quadriplegic detective made famous in The Bone Collector is back in a thriller from the masterful Jeffery Deaver. When a sadistic killer leaves clocks at his murder scenes, will time run out for the criminologist and his partner Amelia Sachs?

On a frigid December night, an eerie pattern emerges from two equally brutal murder scenes, where a killer’s calling card is a moon-faced clock that seemingly ticked away the victims’ last moments. From his wheelchair, criminologist Lincoln Rhyme tracks the Watchmaker, a time-obsessed genius. With every passing second, the Watchmaker is moving with razor-sharp precision to his next act of perfectly orchestrated violence—and Rhyme can’t afford to have his trusted partner Amelia Sachs distracted by a daunting homicide case of her own. Up against a brilliant madman, Rhyme and Sachs are locked in a blood-chilling race with their deadliest enemy: time itself.