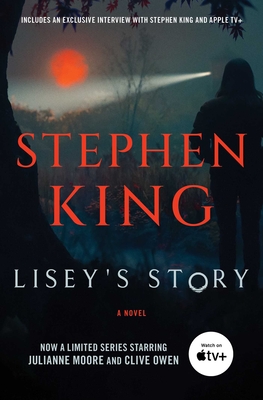 The “haunting…tender, intimate book that makes an epic interior journey” (The New York Times), Lisey’s Story is a literary masterpiece—an extraordinarily moving and haunting portrait of a marriage and its aftermath.

Lisey lost her husband Scott two years ago, after a twenty-five year marriage of profound and sometimes frightening intimacy. Scott was an award-winning, bestselling novelist and a very complicated man. Early in their relationship, before they married, Lisey knew there was a place Scott went—a place that both terrified and healed him, could eat him alive or give him the ideas he needed in order to live. Now it’s Lisey’s turn to face Scott’s demons, to go to that terrifying place known as Boo’ya Moon. What begins as a widow’s effort to sort through the papers of her celebrated husband becomes a nearly fatal journey into the darkness he inhabited.

“Intricate...exhilarating” (The New Yorker), perhaps Stephen King’s most personal and powerful novel ever, Lisey’s Story is about the wellsprings of creativity, the temptations of madness, and the secret language of love. It is a beautiful, “rich portrait of a marriage, and the complicated affection that outlives death” (The Washington Post).

Stephen King is the author of more than sixty books, all of them worldwide bestsellers. His recent work includes Fairy Tale, Billy Summers, If It Bleeds, The Institute, Elevation, The Outsider, Sleeping Beauties (cowritten with his son Owen King), and the Bill Hodges trilogy: End of Watch, Finders Keepers, and Mr. Mercedes (an Edgar Award winner for Best Novel and a television series streaming on Peacock). His novel 11/22/63 was named a top ten book of 2011 by The New York Times Book Review and won the Los Angeles Times Book Prize for Mystery/Thriller. His epic works The Dark Tower, It, Pet Sematary, and Doctor Sleep are the basis for major motion pictures, with It now the highest-grossing horror film of all time. He is the recipient of the 2020 Audio Publishers Association Lifetime Achievement Award, the 2018 PEN America Literary Service Award, the 2014 National Medal of Arts, and the 2003 National Book Foundation Medal for Distinguished Contribution to American Letters. He lives in Bangor, Maine, with his wife, novelist Tabitha King.

"With Lisey's Story, King has crashed the exclusive party of literary fiction, and he'll be no easier to ignore than Carrie at the prom.""
—Ron Charles, The Washington Post

"[An] intricate... novel, King explores two hidden worlds... [and] reveals, with subtle precision, the profound strangeness of widowhood, when someone who was present for so much of a shared life is gone."
—The New Yorker

"Lisey's Story is a wondrous novel of marriage, a love story steeped in strength and tenderness, and cast with the most vivid, touching, and believable characters in recent literature. I came to adore Lisey Landon and her sisters, I ached for Scott and all he'd been through, and when I finally reached the bittersweet and heartfelt conclusion, my first thought was that I wanted to start over again from the beginning, for it felt as if I were saying good-bye to old friends. This is Stephen King at his finest and most generous, a dazzling novel that you'll thank yourself for reading long after the final page is turned."
—Nicholas Sparks, author of At First Sight and The Notebook

"In Lisey's Story, Stephen King makes bold, brilliant use of his satanic storytelling gift, his angelic ear for language, and, above all, his incomparable ability to find the epic in the ordinary, to present us with the bloody and fabulous tale of an ordinary marriage. In his hands, the long, passionate union of Scott and Lisey Landon -- of any long-lived marriage, by implication -- becomes a fantastic kingdom, with its own geography and language, its dark and stirring chronicle of heroes and monsters, its tragedies, griefs, and glories. King has been getting me to look at the world with terror and wonder since I was fifteen years old, and I have never been more persuaded than by this book of his greatness."
—Michael Chabon, author of The Final Solution: A Story of Detection and The Amazing Adventures of Kavalier & Clay