CenterStage: My Most Fascinating Interviews—from A-Rod to Jay-Z (Paperback) 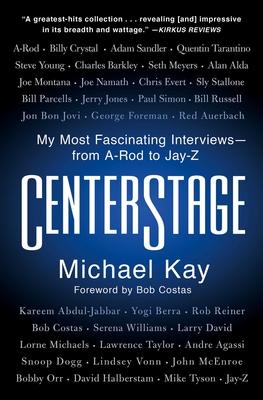 CenterStage: My Most Fascinating Interviews—from A-Rod to Jay-Z (Paperback)


Usually Ships in 1-5 Days
From the longtime host of the New York Yankees’ television broadcasts, ESPN Radio’s The Michael Kay Show, and YES Network’s Emmy Award–winning CenterStage comes an “entertaining…greatest-hits collection” (Kirkus Reviews) of his most memorable interviews with the most intriguing personalities in sports and entertainment—from Jay-Z to Mike Tyson to Serena Williams to Adam Sandler to Bon Jovi to Larry David.

Emmy Award–winning television announcer and interviewer Michael Kay’s eighteen years as host of YES Network’s CenterStage have given him access to many remarkable figures in sports and entertainment. Now, this absorbing selection of the best, most revealing—and often surprising—interviews is available in one amazing collection, including some of the behind-the-scenes stories that didn’t appear on camera. From Kay’s very first CenterStage interview in 2001 with quarterback Steve Young, the show’s creators knew they had something special. Kay’s ability to get celebrities and otherwise private personalities to open up and share candid insights has become his trademark.

For any pop culture fan or sports enthusiast, this prized collection “should be high on your reading list” (Alex Rodriguez, three-time American League MVP).
Michael Kay was born in the Bronx and has lived the dream of being the New York Yankees announcer for the past thirty years—the first ten on radio and the last twenty with the YES Network. He’s also the host of one of the top-ranked radio shows in New York City, The Michael Kay Show on ESPN NY radio, as well as the Emmy Award–winning YES Network interview show CenterStage. Before he entered broadcasting, Michael was a writer with the New York Post and then the Daily News (New York). He lives in Greenwich, Connecticut, with his wife, television news anchor Jodi Applegate, and their two children.
“An impressive range of sports and entertainment stars sit down for friendly chats. [CenterStage is] a greatest-hits collection, some of it revealing, all of it impressive in its breadth and wattage. It’s entertaining to spend time with so many stars.”
—Kirkus Reviews

“The deft, unscripted turns of phrase Michael Kay often delivers in big moments are a testament to a writer’s regard for the beauty and importance of words well-chosen….Over the years, Michael Kay has delivered plenty of good television. Much of it on CenterStage. The proof of that is on the pages that follow.”
—from the Foreword by Bob Costas

“If you ever wanted to know what makes musicians, actors, and star athletes tick, Michael Kay has done the work for you….Kay deftly peels back the facade of celebrity to reveal the fears, hopes, and emotions of the people we thought we knew. CenterStage is a fun read that sparkles with interesting nuggets.”
—Tom Verducci, senior baseball writer at Sports Illustrated and coauthor, with Joe Torre, of The Yankee Years

“Michael Kay is one of the best broadcasters in the business. Turns out he’s one heck of an author, too. CenterStage is an entertaining book and definitely should be high on your reading list.”
—Alex Rodriguez, Three-Time American League MVP

“Fabulous…On display in CenterStage is a Who’s Who of pop culture—from John McEnroe to Jon Bon Jovi, from Sir Charles to Sly Stallone, and including dozens more—and by the time you finish you’ll really feel you personally know them.”
—Jon Heyman, insider for MLB Network and former writer for Sports Illustrated


“Michael Kay never lost the essential gifts of curiosity and inquisitiveness that separate pedestrian interviews from powerful ones. Gathered here is the best of his best, and it is a splendid read from start to finish.”
—Mike Vaccaro, sports columnist for the New York Post


“CenterStage doesn’t just allow readers to glimpse the souls of the rich and famous, it’s a how-to for any aspiring journalist learning the craft of the Q-and-A.”
—Bob Klapisch, coauthor of New York Times bestseller Inside the Empire


“Revealing, entertaining, and emotional. With Kay serving as host, CenterStage has long been must-see T.V. It should come as no surprise then that this compilation of his most memorable encounters is a must-read book.”
—Jack Curry, YES Network studio analyst and coauthor of the New York Times bestseller Full Count: The Education of a Pitcher

“Kay inspires the biggest and most private stars to talk to him and his audience, as if he's talking to a confidant in a bar…Better than anyone, he humanizes celebrities—and his riveting series of CenterStage interviews will show you how he does it.”
—Ian O'Connor, New York Times bestselling author of Belichick and The Captain: The Journey of Derek Jeter


“CenterStage is another example of why Michael Kay is one of the truly gifted interviewers in the history of our industry.  His ability to make all of these sports and entertainment giants feel so comfortable is extraordinary. I bet some felt afterward that maybe they became too comfortable.  It’s just one captivating interview after another.  A mesmerizing book.”
—Mike Breen, play-by-play commentator for NBA on ABC and lead announcer for New York Knicks games on MSG Network

“Michael Kay is a gifted conversationalist.  He has the innate ability to make his interview subjects feel comfortable and get them to share fascinating details about their personal journeys.  It's never cookie cutter with Michael and always insightful and moving with the perfect balance of humor.'
—Ian Eagle, broadcaster for CBS Sports and YES Network