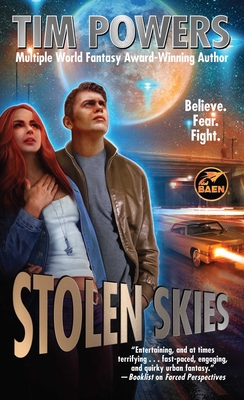 ROGUE AGENTS SWEPT UP IN THE SEARCH FOR AN ANCIENT RELIC IN A UFO NOVEL AS ONLY TIM POWERS COULD WRITE IT!

Sebastian Vickery has learned something about UFOs that he shouldn’t have—and Naval Intelligence, desperate to silence him, orders his old partner, Agent Ingrid Castine, to trap him.

But Castine risks career, liberty, and maybe even life to warn Vickery—and now they’re fugitives on the run from both the U.S. government and agents of the Russian GRU Directorate, which has its own uses for the UFO intelligence.

With the unlikely aid of a renegade Russian agent, a homeless Hispanic boy, and an eccentric old Flat-Earther, Vickery and Castine must find an ancient relic that spells banishment to the alien species, and then summon the thing and use it against them—in a Samson-like confrontation that looks likely to kill them as well.

Sweeping from the Giant Rock monolith in the Mojave Desert to a cultist temple in the Hollywood Hills, from a monstrous apparition in the Los Angeles River to a harrowing midnight visitation on a boat off Long Beach Harbor, Stolen Skies is an alien-encounter novel like no other.

“Powers unveils the mystical underneath the mundane world we live in... he has the ability to describe things you've seen or experienced a million times and show them in a completely new light.” —Boing-Boing

About Forced Perspectives:
“One book I’ve been hugely excited about is Tim Powers’ latest, Forced Perspectives, set in the magical underbelly of modern-day Los Angeles. Powers may be the master of the secret history novel (and one of the originators of steampunk), but his recent work has really explored the history and magic of Tinseltown in a way no one else can.” —Lavie Tindhar, The Washington Post

“. . . frenetic urban fantasy that playfully blends Egyptian mythology, alternate Los Angeles history, and modern technology. . . . A cast of unusual side characters . . . add color and complexity. This labyrinthine tale of the bizarre and fantastic will grip urban fantasy enthusiasts until the end.” —Publishers Weekly

About Alternate Routes:
“Powers continues his run of smashing expectations and then playing with the pieces in this entertaining urban fantasy. . . . This calculated, frenetic novel ends with hope for redemption born from chaos. Powers’ work is recommended for urban fantasy fans who enjoy more than a dash of the bizarre.” —Publishers Weekly

“Alternate Routes is both a thrilling mash-up of science fiction, fantasy, and horror and a work of startling moral sophistication. The horror packs a wallop, and there’s as much in the way of suspense and tension as the reader can bear. Powers takes us on one hell of a ride.” —The Federalist

“Tim Powers is always at the top of the list when folks ask about my favorite authors. His weaving mythology and legend into modern stories that revolve around secret histories of our most mundane landmarks never ever disappoints.” —BoingBoing

Praise for Tim Powers:
“Powers writes in a clean, elegant style that illuminates without slowing down the tale. . . . [He] promises marvels and horrors, and delivers them all.” —Orson Scott Card

“Other writers tell tales of magic in the twentieth century, but no one does it like Powers.” —The Orlando Sentinel

“Powers is at heart a storyteller, and ruthlessly shapes his material into narrative form.” —The Encyclopedia of Science Fiction

“On Stranger Tides . . . immediately hooks you and drags you along in sympathy with one central character’s appalling misfortunes on the Spanish Main, [and] escalates from there to closing mega-thrills so determinedly spiced that your palate is left almost jaded.” —David Langford

“On Stranger Tides . . . was the inspiration for Monkey Island. If you read this book you can really see where Guybrush and LeChuck were -plagiarized- derived from, plus the heavy influence of voodoo in the game. . . .  [The book] had a lot of what made fantasy interesting . . .” —Legendary game designer Ron Gilbert

“Powers’ strengths [are] his originality, his action-crammed plots, and his ventures into the mysterious, dark, and supernatural.” —Los Angeles Times Book Review

“[Powers’ work delivers] an intense and intimate sense of period or realization of milieu; taut plotting, with human development and destiny . . . and, looming above all, an awareness of history itself as a merciless turning of supernatural wheels. . . . Powers’ descriptions . . . are breathtaking, sublimely precise . . . his status as one of fantasy's major stylists can no longer be in doubt.” —SF Site

“Powers creates a mystical, magical otherworld superimposed on our own and takes us on a marvelous, guided tour of his vision.” —Science Fiction Chronicle

“The fantasy novels of Tim Powers are nothing if not ambitious. . . . Meticulously researched and intellectually adventurous, his novels rarely fail to be strange and wholly original.” —San Francisco Chronicle

Tim Powers won the World Fantasy Award twice for his critically acclaimed novels Last Call and Declare. Declare also received the International Horror Guild Award. His novel On Stranger Tides inspired the Monkey Island video game series and was sold to Disney for the movie franchise installment Pirates of the Caribbean: On Stranger Tides. His book The Anubis Gates won the Philip K. Dick Award and is considered a modern science fiction classic and a progenitor of the steampunk genre. Powers won the Dick Award again for straight science fiction post-apocalypse novel Dinner at Deviant’s Palace. Many of his novels, such as Last Call and Alternate Routes, are so-called “secret histories,” which use real historical events in which supernatural and metaphysical elements influence the the story in weird and compelling manners. Powers grew up in Southern California and studied English at Cal State Fullerton, where he met frequent collaborators James Blaylock and K.W. Jeter, as well as renowned science fiction author Philip K. Dick, who became a close friend and mentor. Powers is a practicing Catholic who claims “Stories are more effective, and more truly represent the writer’s actual convictions, when they manifest themselves without the writer's conscious assistance. I concern myself with my plots, but I let my subconscious worry about my themes.” Powers still resides in Southern California with his wife, Serena.