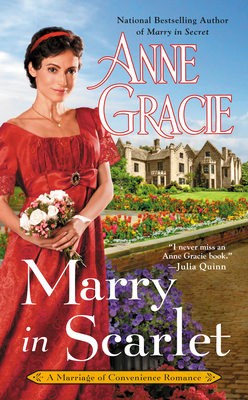 This is book number 4 in the Marriage of Convenience series.

A marriage born of passion and scandal turns into something more from the bestselling author of Marry in Secret.

The proud and arrogant Duke of Everingham is determined to secure a marriage of convenience with heiress, Lady Georgiana Rutherford. He's the biggest prize on the London marriage mart, pursued by young unmarried ladies and their match-making mamas, as well as married women with a wandering eye. He can have any woman he wants. Or so he thinks. . .

Lady Georgiana Rutherford--irreverent and unconventional--has no plans to marry. Having grown up poor, Lady George has no intention of giving up her fortune to become dependent on the dubious and unreliable goodwill of a man. Especially a man as insufferable as the Duke of Everingham, whose kisses stirs unwelcome and unsettling emotions . . .

...Sparks are sure to fly

The more she defies him, the more the duke wants her, until an argument at a ball spirals into a passionate embrace. Caught in a compromising position, the duke announces their betrothal. George is furious and when gossip claims she deliberately entrapped the duke--when she was the one who was trapped--she marches down the aisle in a scarlet wedding dress. But the unlikely bride and groom may have found love in the most improbable of places--a marriage of convenience.

Anne Gracie is the award-winning author of the Marriage of Convenience romance series and Chance Sisters romance series. She started her first novel while backpacking solo around the world, writing by hand in notebooks. Since then, her books have been translated into more than sixteen languages, and include Japanese manga editions. As well as writing, Anne promotes adult literacy, flings balls for her dog, enjoys her tangled garden, and keeps bees.

"[A] confection that brims with kindness and heartfelt sincerity...you can’t do much better than Anne Gracie who offers her share of daring escapes, stolen kisses, and heartfelt romance in a tale that carries the effervescent charm of the best Disney fairy-tales."
—Entertainment Weekly, on Marry in Scandal