The Resolutions: A Novel (Hardcover) 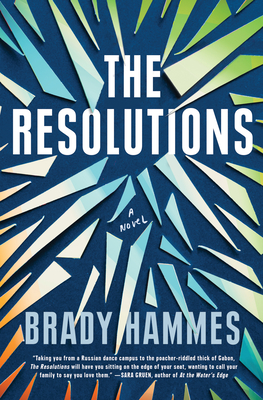 Three accomplished, globe trotting siblings in crisis take refuge in the last place they would ever expect—back home in Chicago, with one another—in this razor-sharp debut for readers of The Nest, Commonwealth, and Imagine Me Gone

The three Brennan siblings are well on their way in the world. Samantha, the youngest, is a ballerina who recently joined the ranks of a Russian dance company; her brother Jonah is a grad student studying elephants in the rainforest of Gabon; and the eldest, Gavin, has stayed closer to home, living in Los Angeles and acting in a television series.

But as the holidays draw near, all three find themselves in profoundly troubling, though distinctly different, predicaments. Samantha is losing the battle to keep her drug addiction from ruining her career; Jonah, in his attempts to protect his elephants, gets in way too deep with a gang of ivory poachers; and Gavin’s TV show is canceled the same day his girlfriend moves out.

With their lives run aground, they reunite in their parents’ home for the holidays, where they discover that the bonds between siblings are unshakable. But with their personal problems threatening to derail their nascent careers and possibly their very survival, the three embark on a trip to West Africa in a perilous attempt to right their crooked paths.

The Resolutions is a contemporary look at three young people in the defining moments of their lives, by a talented author just getting started on a promising literary career.

Brady Hammes is a writer and documentary film editor living in Los Angeles. The Resolutions is his first novel.

“This smartly written tale of three dysfunctional siblings in trouble is fast-paced, witty, and engaging—full of wry wit and insight into the bonds between brothers and sisters. Brady Hammes is an exciting new talent.”—Dan Chaon, New York Times bestselling author of Ill Will

“The Resolutions is touching and thrilling in the most unexpected ways as two brothers, one an out-of-work actor, the other a research scientist in Africa, different as Cain and Abel, join forces to save their sister, a ballerina whose addiction to heroin is killing her. Taking you from a Russian dance campus to the poacher-riddled thick of Gabon, The Resolutions will have you sitting on the edge of your seat, wanting to call your family to say you love them. And to tell them you know exactly what they should read next.”—Sara Gruen, New York Times bestselling author of At the Water’s Edge

“A harrowing tale of three far-flung siblings in crisis, The Resolutions is ultimately a sustained celebration of family in a chaotic world. With assured prose and compassion, Brady Hammes has crafted a debut as wise as it is engaging.”—Smith Henderson, author of Fourth of July Creek

“Brady Hammes makes a wildly diverse trio of siblings utterly convincing and their story utterly absorbing. The Resolutions is an imaginative and engrossing novel from a splendid new writer.”—Robert Olen Butler, Pulitzer Prize–winning author of Perfume River and A Good Scent from a Strange Mountain

“Hammes gives readers three sympathetic, compelling characters trying to find themselves as they grapple with adulthood and the reality of not having accomplished as much as they’d planned. Lovers of character-driven fiction are in for a treat with this debut, which invites them to care about the Brennan siblings and to fully invest in their individual and shared stories, which intertwine in surprising ways.”—Booklist

“[An] entertaining debut . . . Hammes brings his three fractious main characters to riotous life and turns their reunion into a life-changing journey. . . .This reads like a clever mash-up of Jonathan Tropper’s This Is Where I Leave You, Romain Gary’s The Roots of Heaven, and Paddy Chayefsky’s Altered States, and delivers thrills while finding empathy for the cast’s troubled souls.”—Publishers Weekly