The Paris Labyrinth: A Novel (Hardcover) 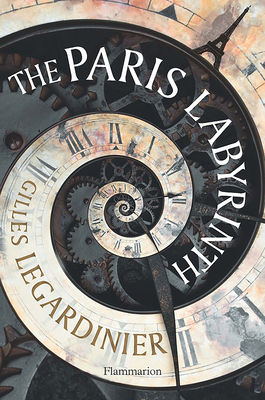 Ingenious illusionist Vincent embarks on a thrilling adventure in turn-of-the-twentieth century France to unlock the mysteries of the past in a quest for lost treasure. Along the way, he battles against dark forces as he tries to discern who he can trust in a race against the clock.

Vincent, more than anyone, knows what it means to keep a secret. With his troupe of talented craftsmen--the only family he has--he designs hidden compartments for priceless treasures and passageways for undetectable escape routes. The rich and powerful who hire him pay handsomely for his work, and for his discretion--they know only his first name, and his business is strictly word-of-mouth.

As Paris celebrates the 1889 World's Fair, the city fills with visitors who come to see the controversial new Eiffel Tower with its gravity-defying escalators, to tout their latest inventions, or to scout for prospective investment opportunities. Vincent takes on an urgent mission so secret he doesn't tell anyone about it. Suddenly, he and his team become the target of assassination attempts. In a race against time, as death licks at their heels, they puzzle over who could be behind the violence. Is it one of their clients trying to erase the secrets they had been hired to conceal? Has their work somehow provoked the dark forces of the occult? Who is this faceless adversary, lurking in the shadows, ready to strike them anywhere, anytime?

Confronted with mysteries uncovered from the past, and a life-or-death challenge that tests the limits of his ability, Vincent will do everything in his power to thwart the menace and protect his friends ... if only he can survive. What he is about to discover will shatter everything he thought he knew about the world....

Gilles Legardinier writes genre-hopping best sellers in French with more than 2 million copies sold and translations in 20 languages. A novelist, screenwriter, producer, and director, his film industry experience in Los Angeles, London, and Paris ranges from scale model maker and pyrotechnician to marketing/distribution for Warner and Twentieth Century Fox.

“French author Legardinier makes his English-language debut with a pulse-pounding thriller set in 1889 Paris…. A secret society figures into the twisty plot of this atmospheric page-turner, a nice blend of Alexandre Dumas père and Dan Brown. Readers will look forward to more Legardinier translations.” —PUBLISHERS WEEKLY

“Deftly constructing an intricate world, Legardinier is at his best when depicting the secret architecture, magical inventions, and sheer genius of Vincent’s designs. These dazzle set alongside the magic of the World’s Fair, with its exhibits of glassworks, clockworks, machinery, and even the Eiffel Tower. Indeed, once Legardinier delves into the most hidden of subterranean vaults, the treasures rival those of Scheherazade’s tales. An exciting adventure story ripe for cinematic treatment.” —KIRKUS REVIEWS

“But regardless of your criteria, The Paris Labyrinth delivers. In this lush historical mystery set in Belle Epoque Paris, a brand-new Eiffel Tower is the controversial new backdrop to a tale of intrigue, murder, and many, many hidden rooms (also secret hallways).” —CRIMEREADS

“A solid mysterious thriller set in a perfect location during a perfect time era. You root for Vincent and his family throughout the novel and are taken on quite the wild ride.” —RED CARPET CRASH

“Narratively, this is a strong story, filled with twists and tension as Vincent and his companions tease out the mysteries presented by Vincent’s two employers… The tale is set during the opening of the 1889 Paris World’s Fair, and the author has clearly put in a lot of research into the experience of visiting such an extraordinary event. The descriptions of the exhibitions and demonstrations are vivid and colorful, beautifully demonstrating the wonder and awe that the Parisians (and visitors from elsewhere) would have felt at the sight. The Eiffel Tower, built as the centerpiece of the Fair, serves almost as a character unto itself within the novel.” —NEW YORK JOURNAL OF BOOKS