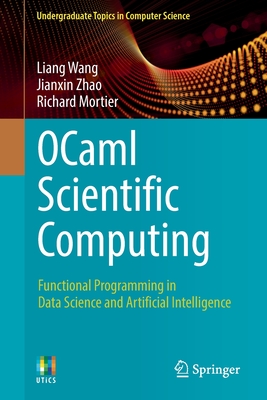 This book is about the harmonious synthesis of functional programming and numerical computation. It shows how the expressiveness of OCaml allows for fast and safe development of data science applications. Step by step, the authors build up to use cases drawn from many areas of Data Science, Machine Learning, and AI, and then delve into how to deploy at scale, using parallel, distributed, and accelerated frameworks to gain all the advantages of cloud computing environments.

To this end, the book is divided into three parts, each focusing on a different area. Part I begins by introducing how basic numerical techniques are performed in OCaml, including classical mathematical topics (interpolation and quadrature), statistics, and linear algebra. It moves on from using only scalar values to multi-dimensional arrays, introducing the tensor and Ndarray, core data types in any numerical computing system. It concludes with two more classical numerical computing topics, the solution of Ordinary Differential Equations (ODEs) and Signal Processing, as well as introducing the visualization module we use throughout this book. Part II is dedicated to advanced optimization techniques that are core to most current popular data science fields. We do not focus only on applications but also on the basic building blocks, starting with Algorithmic Differentiation, the most crucial building block that in turn enables Deep Neural Networks. We follow this with chapters on Optimization and Regression, also used in building Deep Neural Networks. We then introduce Deep Neural Networks as well as topic modelling in Natural Language Processing (NLP), two advanced and currently very active fields in both industry and academia. Part III collects a range of case studies demonstrating how you can build a complete numerical application quickly from scratch using Owl. The cases presented include computer vision and recommender systems.

This book aims at anyone with a basic knowledge of functional programming and a desire to explore the world of scientific computing, whether to generally explore the field in the round, to build applications for particular topics, or to deep-dive into how numerical systems are constructed. It does not assume strict ordering in reading - readers can simply jump to the topic that interests them most.

Liang Wang is a Principal AI Architect at Nokia, a Senior Researcher at the University of Cambridge, an Intel Software Innovator, and the Chief Scientific Officer at IKVA. He has a broad research interest in artificial intelligence, machine learning, operating systems, computer networks, optimization theory, and graph theory. Jianxin Zhao is a PhD graduate from the University of Cambridge. His research interests include numerical computation, artificial intelligence, decentralized systems, and their application in the real world. Richard Mortier is a Professor in Computing and Human-Data Interaction at the University of Cambridge. He works at the intersection of systems and networking with human-computer interaction, and he currently focuses on building user-centric systems infrastructure.