Quantum Physics: an overview of a weird world: A primer on the conceptual foundations (Paperback) 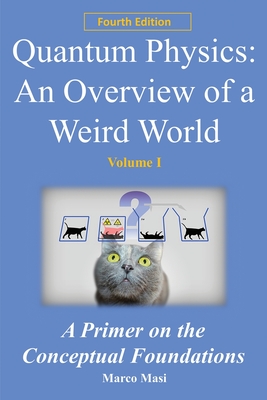 There is probably no science that is as confusing as quantum theory. There's so much misleading information on the subject that for most people it is very difficult to separate science facts from pseudoscience. The goal of this book is to make you able to separate facts from fiction with a comprehensive introduction to the scientific principles of a complex topic in which meaning and interpretation never cease to puzzle and surprise. An A-Z guide which is neither too advanced nor oversimplified to the weirdness and paradoxes of quantum physics explained from the first principles to modern state-of-the-art experiments and which is complete with figures and graphs that illustrate the deeper meaning of the concepts you are unlikely to find elsewhere. A guide for the autodidact or philosopher of science who is looking for general knowledge about quantum physics at intermediate level furnishing the most rigorous account that an exposition can provide and which only occasionally, in few special chapters, resorts to a mathematical level that goes no further than that of high school. It will save you a ton of time that you would have spent searching elsewhere, trying to piece together a variety of information.

The author tried to span an 'arch of knowledge' without giving in to the temptation of taking an excessively one-sided account of the subject. What is this strange thing called quantum physics? What is its impact on our understanding of the world? What is 'reality' according to quantum physics? This book addresses these and many other questions through a step-by-step journey. The central mystery of the double-slit experiment and the wave-particle duality, the fuzzy world of Heisenberg's uncertainty principle, the weird Schr dinger's cat paradox, the 'spooky action at a distance' of quantum entanglement, the EPR paradox and much more are explained, without neglecting such main contributors as Planck, Einstein, Bohr, Feynman and others who struggled themselves to come up with the mysterious quantum realm. We also take a look at the experiments conducted in recent decades, such as the surprising "which-way" and "quantum-erasure" experiments. Some considerations on why and how quantum physics suggests a worldview based on philosophical idealism conclude this first volume.

This treatise goes, at times, into technical details that demand some effort and therefore requires some basics of high school math (calculus, algebra, trigonometry, elementary statistics). However, the final payoff will be invaluable: Your knowledge of, and grasp on, the subject of the conceptual foundations of quantum physics will be deep, wide, and outstanding. Additionally, because schools, colleges, and universities teach quantum physics using a dry, mostly technical approach which furnishes only superficial insight into its foundations, this manual is recommended for all those students, physicists or philosophers of science who would like to look beyond the mere formal aspect and delve deeper into the meaning and essence of quantum mechanics. The manual is a primer that the public deserves.