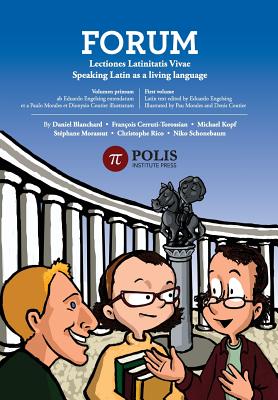 The goal of Forum is to enable students to speak Latin as a living language. Studies have shown that unless one speaks, reading fluency becomes difficult to attain. Because it teaches students to speak Latin, Forum prepares them to read without the use of dictionary or translation, and to read as fluently as one might read in any modern language.

Whether used by students on their own or by an instructor with a group, this first-level book submerges the student within the language. The audio files that are available for free download on the Polis Institute website will help the student to internalize grammatical forms and vocabulary. As only the Latin language is heard by the students using these files, they are unable to rely on an intermediary language and are thus compelled to employ the new skills they have acquired through this text.

Forum teaches Classical Latin in the broadest sense. The classical period includes the golden age of Latin literature (1st c. BC - 1st c. AD) as well as the Imperial Latin from the Nerva-Antonine dynasty (96-192 AD) and the Severan dynasty (193-235 AD). This period has the advantage of being an intermediate between pre-Classical Latin and Late Latin (3rd c.-6th c. AD). Even authors from the 4th or 5th centuries AD such as St. Augustine of Hippo or St. Jerome, albeit writing in a slightly different language than the classical one, took the golden age of Latin literature as a reference. Studying Classical Latin (in the broad sense) allows us to easily read the most interesting Latin texts of Antiquity and the Middle Ages.