Suppression, Deception, Snobbery, and Bias: Why the Press Gets So Much Wrong--And Just Doesn't Care (MP3 CD) 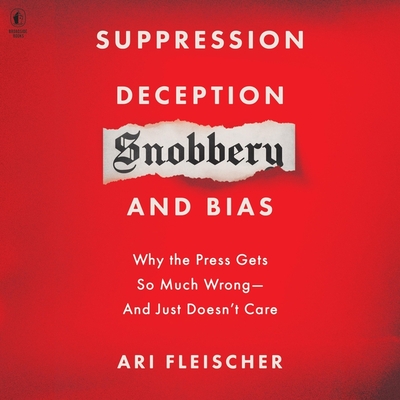 By Ari Fleischer, Charles Constant (Read by)
$41.99
Email or call for price.

Russian collusion. The lab-leak theory. The Hunter Biden laptop. Mostly peaceful protests. What if America's misinformation problem is coming from inside the mainstream media?

Fox contributor Ari Fleischer says most Americans live in a media-created fantasyland. Never before have we been so information-rich yet so poorly informed. America's liberal media keeps getting the news wrong.

In Suppression, Deception, Snobbery, and Bias, Fleischer notes that half the country is keenly aware that they are routinely mocked and looked down on by much of the media. The disdain shown by too many reporters for too many Americans is a major reason our nation is polarized and divided.

Today's mainstream media is dominated by college-educated Democratic voters who write stories for other college-educated Democrats. These journalists haven't just slanted the media; they take sides in our debates and are too often activists for a cause. There is no secret meeting where liberals decide how to slant the news. There is no central source of propaganda. It's worse than that. It comes naturally to the media because they're too much alike--they have a diversity problem.

It's time the press faced up to why so few people trust them and why they've been losing viewers and readers for decades. Suppression, Deception, Snobbery, and Bias is the reckoning they will never do on their own.