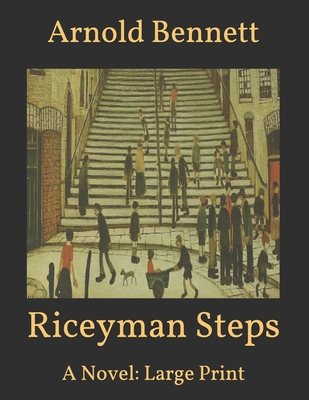 On an autumn afternoon of 1919 a hatless man with a slight limp might have been observedascending the gentle, broad acclivity of Riceyman Steps, which lead from King's Cross Road up toRiceyman Square, in the great metropolitan industrial district of Clerkenwell. He was rather less thanstout and rather more than slim. His thin hair had begun to turn from black to grey, but hiscomplexion was still fairly good, and the rich, very red lips, under a small greyish moustache andover a short, pointed beard, were quite remarkable in their suggestion of vitality. The brown eyesseemed a little small; they peered at near objects. As to his age, an experienced and cautious observerof mankind, without previous knowledge of this man, would have said no more than that he mustbe past forty. The man himself was certainly entitled to say that he was in the prime of life. He worea neat dark-grey suit, which must have been carefully folded at nights, a low, white, starched collar, and a "made" black tie that completely hid the shirt-front; the shirt-cuffs could not be seen. He wasshod in old, black leather slippers, well polished. He gave an appearance of quiet, intelligent, refinedand kindly prosperity; and in his little eyes shone the varying lights of emotional sensitiveness.Riceyman Steps, twenty in number, are divided by a half-landing into two series of ten. The manstopped on the half-landing and swung round with a casual air of purposelessness which, however, concealed, imperfectly, a definite design. The suspicious and cynical, slyly watching his movements, would have thought: "What's that fellow after?"A man interested in a strange woman acquires one equine attribute-he can look in two directions atonce. This man could, and did, look in two directions at once.Below him and straight in front he saw a cobbled section of King's Cross Road-a hell of noise anddust and dirt, with the County of London tram-cars, and motor-lorries and heavy horse-drawn vanssweeping north and south in a vast clangour of iron thudding and grating on iron and granite, beneath the bedroom windows of a defenceless populace. On the far side of the road were, conspicuous to the right, the huge, red Nell Gwynn Tavern, set on the site of Nell's still hugerpalace, and displaying printed exhortations to buy fruity Portuguese wines and to attend meetings ofworkers; and, conspicuous to the left, red Rowton House, surpassing in immensity even Nell'svanished palace, divided into hundreds and hundreds of clean cubicles for the accommodation ofthe defeated and the futile at a few coppers a night, and displaying on its iron fa ade a newspaperpromise to divulge the names of the winners of horse-races. Nearer to the man who could look twoways lay the tiny open space (not open to vehicular traffic) which was officially included in the title"Riceyman Steps." At the south corner of this was a second-hand bookseller's shop, and at the northan abandoned and decaying mission-hall; both these abutted on King's Cross Road. Then, on eitherhand, farther from the thoroughfare and nearer the steps, came a few private houses with carefullycurtained windows, and one other shop-a confectioner's.