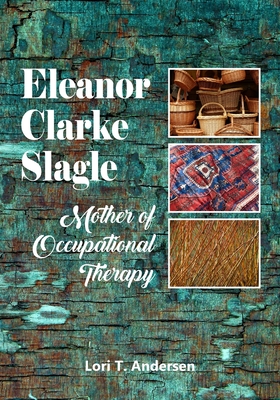 Eleanor Clarke Slagle: Mother of Occupational Therapy is about an inspirational leader who lived during the Progressive Era, a time when women were just starting to become advocates for social and political reforms. Like other women during this era, she worked to improve the quality of life for people with mental and physical disabilities through the therapeutic use of occupation. Her groundbreaking efforts changed the course of health care and have improved the quality of life for countless lives since then.

Lori T. Andersen, EdD, OTR/L, FAOTA, a Fellow of the American Occupational Therapy Association, is a historian and experienced author, who co-authored the book, "The History of Occupational Therapy: The First Century". Using extensive research from academic, archival, and genealogical resources, the author describes Mrs. Slagle's life, including her upbringing in Delaware County, her extended family, and her personal and professional activities, weaving these facets to make her come alive.

Destined to stand out in history, Eleanor Clarke Slagle, born in the small village of Hobart, in Delaware County, New York, now rests in Locust Hill Cemetery in Hobart with her father William J. Clarke who served in 144th New York State Volunteer Infantry during the Civil War, her brother and sister-in-law, John Davenport Clarke and Marian Clarke, who both served in the United States Congress. To honor her roots and her accomplishments, and for those who want to learn more about the life of this notable woman of Delaware County - this is her story.

Richly illustrated with rare images that give the reader an insight into her remarkable life.